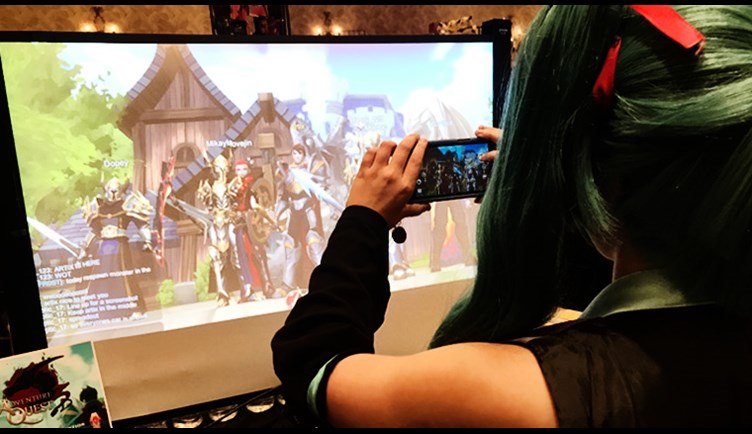 Selfieception? - She is taking a picture of herself (her character) on the screen at our booth, while logged into the game, while standing next to me, while I am also logged in. O_O

We just got home from Anime Festival Orlando, where we hosted a 100-player-per-room live event... from our booth. Seriously. 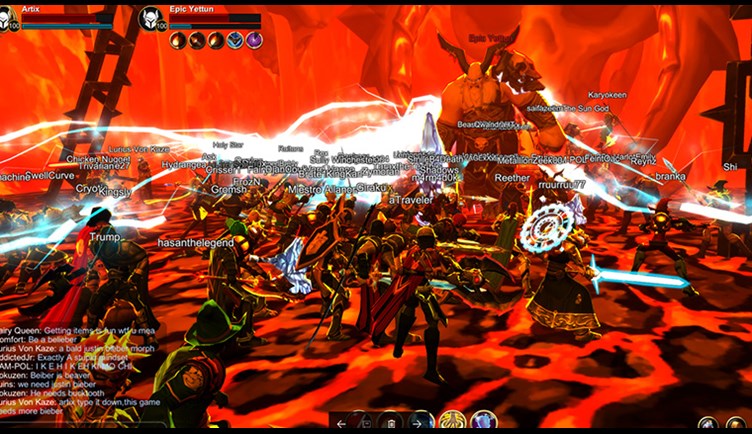 "A Yettun's Chance in the UnderWorld"

We had hinted that we MIGHT do an encore of the 100 player live dungeon that we did at the last convention. What we DID NOT EXPECT... was everyone to be waiting for us when we logged on. I mean, just look at this... 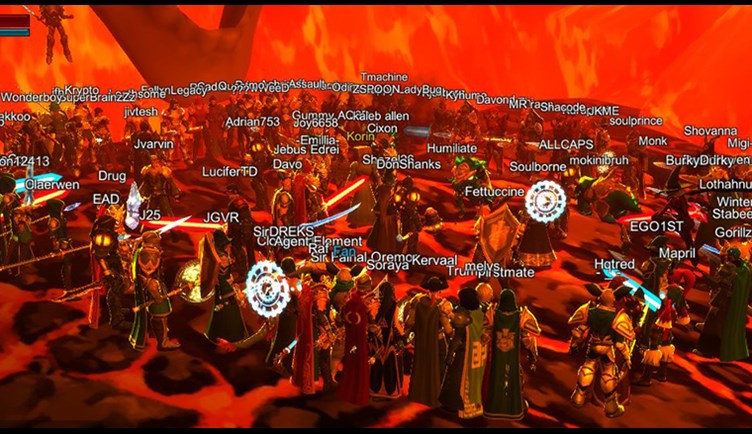 (NOTE: I am not sure if this is the right screenshot... if it is the wrong one, it looks exactly like what I saw when logging in from our panel.)

You got to the event before anyone in the room did!

During our official AdventureQuest 3D Panel at the convention, I asked everyone there to take out their phones and join us. I opened up the 100 player map and rebooted the Red Dragon server. Upon logging in-- THERE WERE ALREADY OVER  A HUNDRED PLAYERS THERE WAITING! Which was ultra crazy because no one knew for sure when it was going to happen. 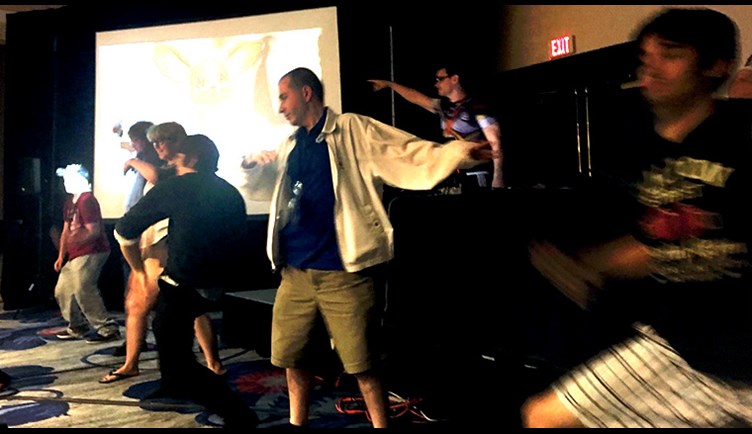 It also meant that some of these brave souls who competed our panel's impromptu dance contest were unable to get in the same room. But they did get prizes >_> 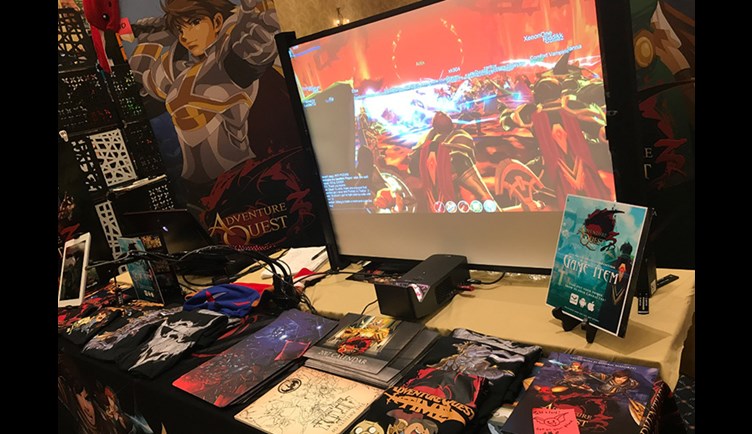 Then panel ended... but the event did not!

After our panel ended, we headed back to our booth. Stryche logged in and said, "Uh, Artix... there are still three rooms with a hundred people each in them." So, LOL, we decided to continue running the event from our booth. Stryche commanded one room from his phone, Korin commanded one from his computer at home, and I was spawning monsters from my laptop, which was hooked up to a projector for everyone walking around the convention to see! 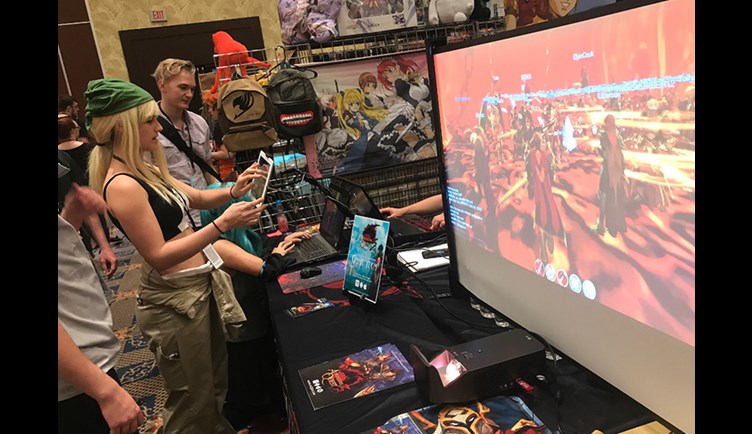 My favorite thing to do in the world

So during this "live" event, we simply spawned hordes of monsters for everyone to fight. Which, was one of the most memorable and fun things ever! Especially when the monsters were so tough that not even the staff could kill them. In fact, the hardest fights (NecroChibi, The Level 100 Yettun) were some of the most memorable. The experience of just being there is fun, but I want to expand out tools so we can better live host events across more interesting and complex dungeons and have really awesome treasure chest system for giving... PRIZES! 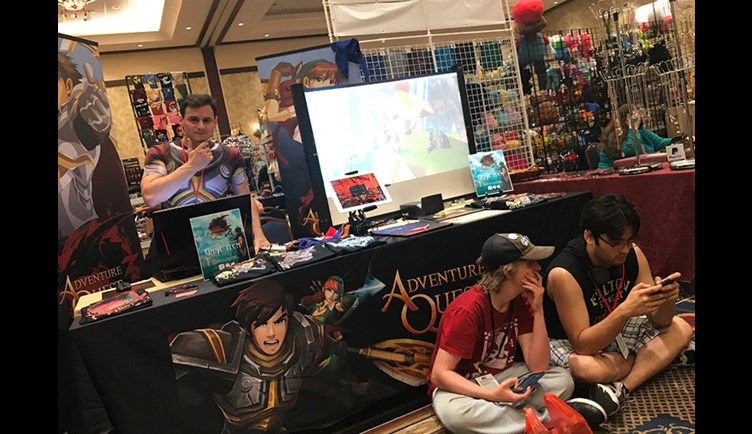 AdventureQuest 3D's cross platform features makes it unique. It also makes it a bit hard to explain to someone at first glance. It normally take a bit before someone says, "Huh!? How are they on that screen? They are on their phones..." Our booth inevitably turned into a hotspot for gamers. 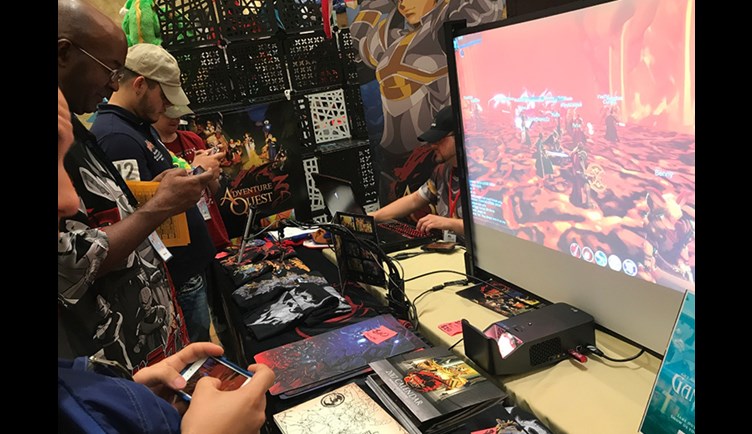 This may sound silly, but the real value of going to these conventions is talking to real, live people who have not heard of the game before. We have been doing our thing for so long, that there are a lot of words and concepts that we take for granted that other people have never heard of. So these conversations really help figure out how to communicate better...  both in real life, and in the game. The only problem is after realizing how many things we need to fix.... now that I am back, I HAVE TO ACTUALLY GO FIX IT ALL O_O. 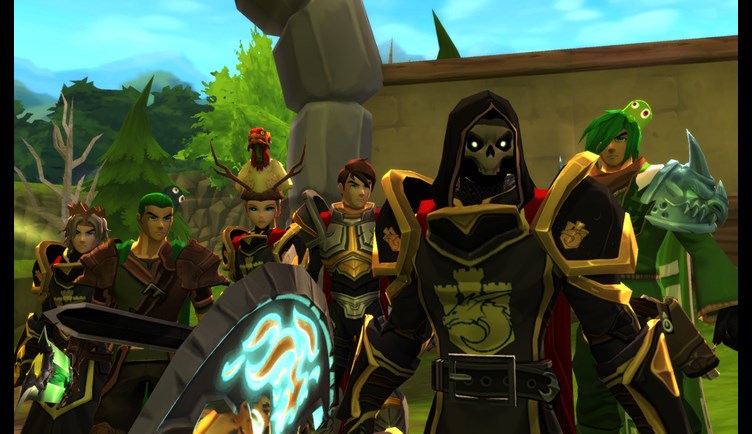 Best Convention for players who were playing our game

I felt this was the first convention where we really got to include you. That is, everyone playing the game was on display-- whether it was on the tablets, PCs, or on the projector. It felt like our booth was a rip in time and space allowing people to peek through the portal and see and interact with you. There was one moment where a ton of people were standing on the fountain waving and people took a photo waving in real life in front of it. Things like that and the 100 person live dungeon which ran all weekend made this extremely memorable. 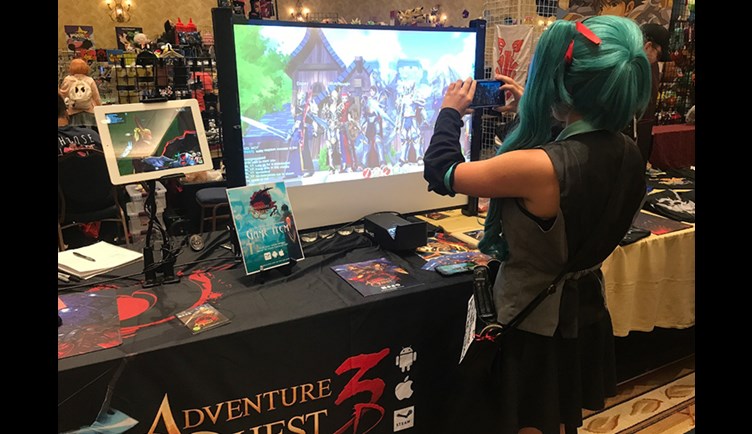 TIP: Right now AdventureQuest is horribly broken and dropping rare spawn chests in every dungeon. This is a result of an emergency fix we rolled live... which dragged some unintentional meta data files with it. It is too hard to fix with a roll back, so instead we are charging ahead with our stat and experience curve release which will be coming as soon as it is approved! Until then... get those rares!