Greetings and salutations! I am writing to tell you a tale. A tale of the bubble universe known as DragonCon and the impossible scenarios which magically took place there.

But this story is told a week later... mostly because of the dread plague known as "CON ROT"

Con-Rot (Khan'-Rhaght) n. Slang for "Convention Rot." The evil vile plague you get when 90,000 costume wearing convention attendees are confined to just a few buildings and pathogens brought in by only a handful spread, mutate and evolve like some sort of zombie apocolypse over the course of a convention. Symptions include sniffles, fatigue, hunger for brains, rigor mortis, and the compulsary need to watch re-runs of Doctor Who.

There were 90,000-ish people at DragonCon this year... which by my calculations is: WAY TOO MANY!!!

Fan Conventions are becoming extremely popular. While there are many popular conventions, Comic Con and all of the local variants of it have really brought conventions into our mainstream culture. This can be illustrated by a conversation with my Grandparents.

Me: I am going to DragonCon this week?
Grandparents: What's that? Is it contagious?Me: It is a convention... um... like ComicCon.
Grandparents: Oh, ComicCon! What will you be cosplaying as? What TV Celebrities will be there? Can you get me an autograph?
Me: O_O

Cosplay (Which is "Costume play" or dressing up like character from anime, TV shows, movies, comics, etc) is a huge part of any fan convention. Some people work all year on their costumes. Why? Easy... at conventions, the Cosplayers get the celebrity spotlight! People come just to see their costumes and take photos of them. Sure, there are contests which cosplayers take super seriously. But it is important to know... when someone works all year on their fully functioning Iron Man suit, and they show up at a convention, THEY ARE IRON MAN! (At least for that weekend.)

It is really fun to see all of the people cosplaying at DragonCon. The characters Dead Pool and HarleyQuinn have become SUPER POPULAR. They were always cool... but they hit critical mass this year. At the last three conventions I have been to there were "Dead Pool parades" where a hundred-ish people cosplaying as weird variants of Dead Pools marching in a congo line. (Given the upcoming Dead Pool movie, I wonder if there is a brilliant grass roots marketing strategy by the secret organizers.)

Our panel was a HUGE SUCCESS! Thank you to everyone who attended. We were surprised that there were more of you than last year. We even got in trouble four times for noise... WOOOHOOO WAY TO GO! Because, *coughs* our panels are ALWAYS the craziest, silliest, and loudest. We have a reputation to uphold.

The line started forming about an hour early. So I got to go and meet everyone one on one who was standing in the line which was super cool! So many familiar faces from previous years... and I was shocked at how many of the people I met as wee lil' lads and ladies are now fierce strong fully grown men and woman with manly man facial hair! (Well, not the ladies... except for the ones cosplaying as Lord of the Rings Dwarves.)

As the panel finally started, we had ONE major problem. We only had ONE hour to cover our existing games and all of our new upcoming video games. So Cysero declared that this was going to be: Video Game Speed Dating!

The premise was simple... at real life speed dating events, you talk to someone for a minute, and when the timer buzzes, you get up and switch to the next person. So we said, "We are going to find you the video game of your dreams to fall in love with." Every few minutes the buzzer went off... symbolically, everyone in the audience stood up and switched seats. Then we presented the next game! It was funny, intense, and... we could not believe people actually got up and switched seats every time. (Bravo to all you crazy DragonCon goers!)

A lot had happened since the last DragonCon!

AdventureQuest Worlds "Queen of all Monsters"

Everyone was really excited to hear that the new main storyline is finally getting the focus it deserves. Following this years anniversary event, we are diving into the storyline head first. Beware... what we do know, the Queen of all Monsters feeds on fear. And she is hungry... really hungry.

Since we never really advertised it, very few of our players know about the gag game we made... AdWatch. Yes, it really is/was the world's first competitive ad watching "video game." Against our better judgement we watched all the videos at the panel... everyone watched in horror and laughed. George Lowe (Space Ghost) and one oft he girls from player support voice acted the characters.

This game got the nostalgia award. We had no idea so many people had played the original flash game. Well, we sorta did... we know it got at least 10 million plays around the world. For all the work we spent drawing the back hands and legs for all of the characters... no one seemed to notice O_O. As I write this post, I think we are less than 2 weeks away from submitting the game app to the mobile app stores!

EpicDuel's first foray into Mobile received a VERY ENTHUSIASTIC response! I have to admit, I did not expect the unusually high level of interest we got after showing the intro video. This game is a lot deeper than Undead Assault... and, frankly is the perfect twitch mobile game. (I mean finger twitch, not twitch streaming... although you can certainly stream it if you want.)

AdventureQuest 3D = YOUR ONE TRUE LOVE!

We talked about a lot more than what I listed here... but the main event of our speed-dating panel was unquestionably AdventureQuest 3D.

My favorite part was when we gave people at the panel our Google Cardboard demo! LOL, everyone does the same thing.

When AdventureQuest 3D is released for the PC (In the form of a download or a Windows 10 app, or Steam Game) it will have Occulus Rift support and a true immersive 3D VR experience. The Google Cardboard is really cool to show people... but honestly, not a great game playing experience. But... seriously fun to show people. I think we could make some games specifically designed for the google cardboard that would be a ton of fun.

Did you ever have that dream you were standing in front of your class and you suddenly realized you were not wearing anything?

On the way to DragonCon I logged in using my iPad. Zhoom had just finished a new build where he changed all of the textures. The Paladin armor must have not been converted yet.... because I logged straight into Yulgar's like this. After a moment of wide eyed O_O "Oh no... " I typed, "Um... do you see me wearing Paladin armor." It was possible the armor was just not showing on my device, I reassured myself. Then two players in the room reponded, "Nope."

I turned bright red in real life and logged out immediately.

I got to meet some of the Aqua Team Hunger force guys. The guy who voiced Frylock and also the one who did the Mad Scientist (also Brak.) Which of course got me thinking... WHY DO WE NOT HAVE AN ADVENTUREQUEST CARTOON/ANIME/TV-THING! If we did make one... should it be funny? Stupid-funny? Crazy? Or epic? Or Evil Dead 2 / Army of Darkness style epic & funny? I am thinking outloud... please do join in. If you have been a long time player you know I have talked about this a lot but since that time we hired the Producer and Writer from LA back in '10, we never moved forward with anything. We live in different times now. We could actually make this happen. Maybe... I should start drafting a script O_o.. Or maybe we should get Cysero and Yergen to do it based on the crazy stuff they did on AdWatch and the AQ3D video. Thoughts?

Crazy late at night, tucked away in the corner of the bottom floor... I spy two Jedi and a Sith lord armed with Light Sabers. My immediate thought is.... MAYBE WE CAN MAKE A VIDEO! So 10 minutes later... 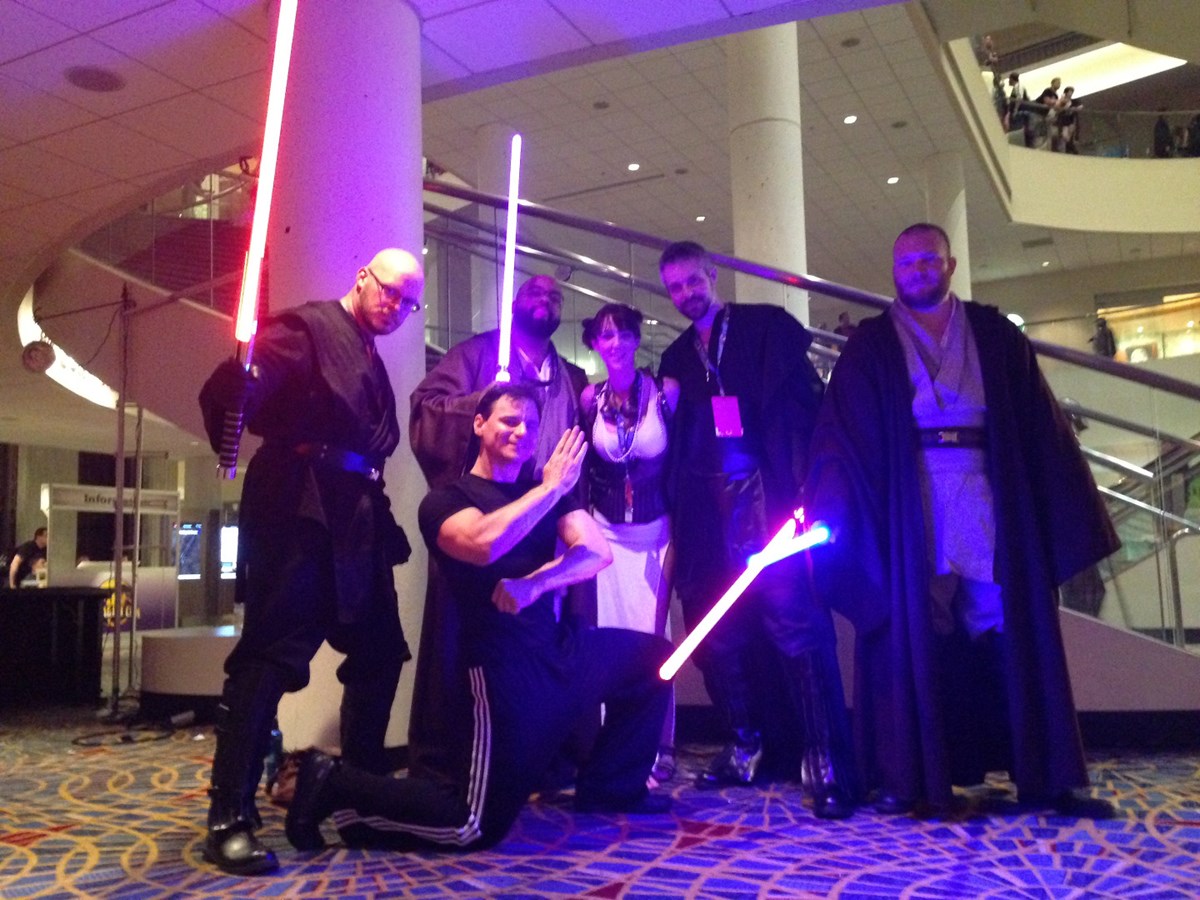 Cysero and I drove to DragonCon together. It is 8 hours each way. Honestly, it is one of my most favorite parts of DragonCon. We talk about how grateful we are. We reminisce about all the things we have done... and the things we want to accomplish next. As you know, I tend to be super optimistic and cheery about things. Cysero, on the other hand is a realist (with a persistent sarcasm buff.) So our debates can be pretty.... comical. And you know what we debate about? Things you say to us on Twitter. That is right... we debate over the same things you debate with us about. Your influence somehow even reaches into my car.

I would like to thank you. Specifically you. Not just for making it to the end of this long post... but for being a part of our lives. Because DragonCon is one of the few times we get to interact face to face with actual players of our games like you-- it is a yearly reminder of how important you are. We are grateful each and every day. Just in case you did not know that... I wanted to say, thank you.

BONUS: To everyone I took a selfie with that is wondering... how do I get that picture? I posted them on Facebook.