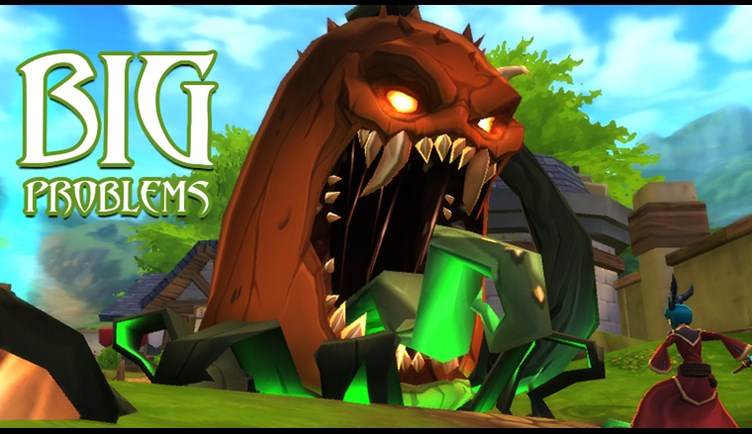 Pictured above: This is what happens when you go AFK on the development server.

"When the coding gets tough... the tough get coding."

Yup, you saw a few new terrible bugs enter the game. We read your feedback and bug posts (Thank you!) and the time has come to unleash the bug spray bazooka. Grab your magical vorpal fly swatters of insect implosion +1 as we count down the top 5 bugs in AdventureQuest 3D-- and  immediately squash them. *STOMPS* ...with fire *FIRE STOMPS*

Did you ever enter a random dungeon and see an NPC's ! bubble sticking up through the floor? Want to know why it happens? Ready? *gulps* Multiple maps were all loaded at the exact same time. What!? How is this even possible!? Players have been reporting this for a really long time. But when we added random dungeons it started happening... a lot. Which is good news! (Well, not for those trapped between the worlds, but for figuring out why.) If turns out, clicking the random adventure button too many times, too fast, it causes your game client to load multiple maps! O_O. Not good. Which explains why you see bits and pieces from other maps sticking through the floor. There is no benefit to doing this since the server only allows you to be in one area at a time, and it knows where you really are. But having all those extra maps loaded causes additional problems. The coding team is almost done fixing this and plans a HOT PATCH to go out this week.

#4 No loot from Random Dungeons

We have had a lot of reports of players not getting loot from dungeons. Turns out... it was related to the multiple map bug! So fixing #5 will also fix this. :D Go HOT PATCH go!

No, this is not simply about Artix's allergy to the color pink, I mean when in game things are totally 100% pink. As seen in the Guardian tower last week when a shrub went completely pink. (Or also how the Beta Berserker belt suddenly went flesh colored) Why does this happen? There are two reasons things can become completely pink in game. The 1st reason is if it is missing it's texture. That means the 3D model is there, but there is no art on top of it. This one is pretty rare, but like the Guardian Tower's pink shrub last week, it can happen after an update. The 2nd reason if if your video card does not support some fancy pants thing we are trying to do. Good news, is that AdventureQuest 3D was created to support as many devices as possible so you should not see this problem. (Remember that one time a player was unable to run the game because they had a super old video card and we sent them a new video card?)

#2 Falling through the Floor of a Dungeon

Last Mogloween, before we started getting rid of dungeon keys, before we had scaling dungeons, we had one of the most notorious bugs ever-- falling through the floor!  We tried a lot of things to fix this one, but it mysteriously kept popping back. Turns out... it is ALSO related to bug #5 on this list (surprise!) and they are attempting to 100% solve it as part of the upcoming hot patch.

We saved the BEST (actually, WORST) for #1. Sometimes, after fighting monsters, you just remain... stuck in combat. If this has ever happened to you, it is the worst. Because you cannot travel, change class, interact with NPCs, or a lot of other things while in combat. Why does this happen? Every monster in the game has secret list called "The Aggro Table". When you attack a monster, or it is hostile and notices you, then you are added to its list. Which basically means it will hunt you until someone is X_X dead or you run far enough away that it gives up and goes back to where it came from. There are a few weird cases where server gets confused and you get stuck on a list that no longer exists-- maybe not too weird, because it happens a lot. (Mostly with Area of Effect skills on monsters) It is/was not an easy fix. This is because it was so deeply rooted in the details of our combat system that... well, just imagine Zhoom putting on a surgeon's coat, gloves, and performing open heart surgery on the video game. Well, imagine he had done it... because he already has. Cross your fingers and do any appropriate special magic dances because the upcoming hot patch may very well solve the Stuck in Combat bug too!

Melt our video game's bugs in your scorching inferno....

It is snack time.

Dang it, did I forget to eat lunch again?

Wait... is it Hot Fix or Hot Patch? These technical terms are so confusing.

AdventureQuest 3D's Version 1.5.1b2 "Bug Burning Inferno" Hot Patch is in testing now, and scheduled for submission and release this week.