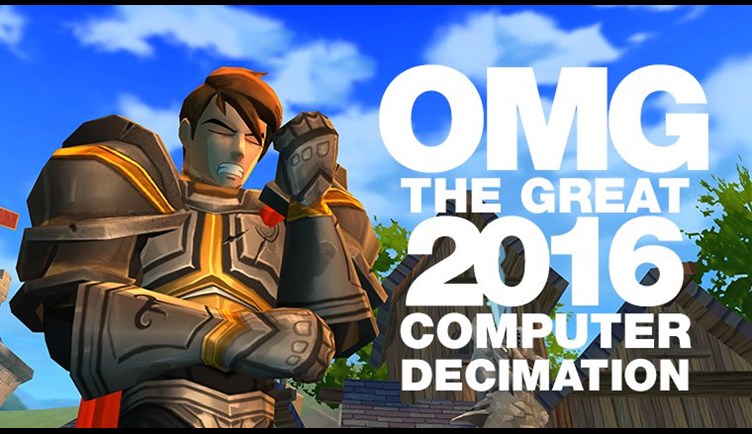 Four of our work computers are DEAD!

Four... O_O... YES... FOUR of our computers suddenly died-- each with a completely different and bizarre reason. Some Game Dev disaster stories are just too good to be made up.

Artix's Computer: Motherboard & Video Card fail
Wait... Artix's computer? The same one he dumped an entire cup of tea on a year ago? The same one that Dage electrocuted in that usb charger incident earlier this year? *dramatic pause* ...yeah. The motherboard and video card choose THIS WEEK to finally give out. So it is going back into the shop for a 3rd time.

Dage's Computer: Raid 0 Hard Drive Failure
OH NOOOOO! "Dage, please tell me you keep your files on the 1 TB drive, not your raid 0 boot drives..." *dramatic pause* "Yeah Artix! That is where I keep my backups." *Whew!* "Except for all the files I am currently working on." /facedesk. Shipped to get data recovery.

Rolith's Computer: Power Failure
Rolith gets to the lab, takes the laptop out of his backpack, sets up his computer, and presses power button.... *eerie silence* Nothing. Dead.

Oishii's Computer: Endless Blue Screens of Death
She can boot up her computer... but she has been getting so many blue screens of death that we actually thought it was her screen saver. Today, the computer went from bad to worse...

Fight through! No matter what it takes.

We are just 6 days from the start of AdventureQuest 3D's OPEN BETA-- and WE INTEND TO HIT THAT DATE!

Some players reading this might not understand how hard building a true cross-platform game is. We are already battling through the biggest, most complicated workload we have ever had before. Everyone on the team is racing to complete their tasks in time for launch. So what happens when you get thrown a curve-ball like this at the 11th hour? Read on... because in your tougher moments is when your real character shows.

My computer died first, so I ordered a replacement. Rolith's died next and he had essential server tools on it that he had not published yet. We tested a bunch of things and discovered that we could replace his power cord / battery from someone else's machine to get him operational. Dage's died next... which was the biggest blow since he had new weapons for Open Beta trapped (probably lost due to the raid 0 failure) on his machine. So we ran to Best Buy and got a decent machine that he could use while we send his back to the shop. BUT... it seemed the new machine was not powerful enough to handle his tablet-screen and 3D Painting tools. /sigh. They were already reformatting to return it by the time I heard about this. Fortunately my new machine arrived today! So I could just give my new machine to Dage so he can paint weapons. But then Oishii's machine died. Her work is the most vital because she is doing all the balancing / gameplay / database changes. This is the point where you need to immediately make one big move to solve all the problems and get everything back on track for release. *moment of clarity!* So I personally went and setup Dage's new temp machine and got it to work "fast enough" for him to paint. I am setting my new machine up tonight and then giving the one I had been using to Oishii-- which will be a super good upgrade for her. Then, when Dages computer is repaired, we can give his machine to Rolith. BAM! *drops mic*

Back on track! At least until tomorrow's new problems hurl at me :D

BONUS: What does Decimation really Mean?

Great Question! Glad you asked :D Most people think "decimation" means utter and complete destruction, but it actually means... 1 out of 10. Back in Roman times... should I tell this story? ...there was a thing called Decimation where they punished Legions who failed them by killing 1 out of every 10 soldiers as strong reminder to not fail them again. Not a very popular way to boost moral! "You have failed me for the last time legionnaire!" But anyway, decimate means 1 out of every 10. So if you here a phrase like, "the city was decimated" that probably means that 1 out of every 10 buildings was destroyed.

Between all of the game teams, we have 40 staff members in Artix Entertainment. So 4 computers is exactly 1 in 10 of our computers... hence, our companies computers were quite literally, decimated.