In Darkovia, a land cursed by eternal darkness, the Vampires and Werewolves lock fangs in a deadly war! What caused the tense peace between these two factions to suddenly snap? More important, why are they fighting so fiercely over the small town of Darkhurst? Does it possess a secret or some sort of terrible prize? A ShadowSlayer has appeared in town to help protect the townsfolk-- but in a conflict of this size, they cannot do it alone. 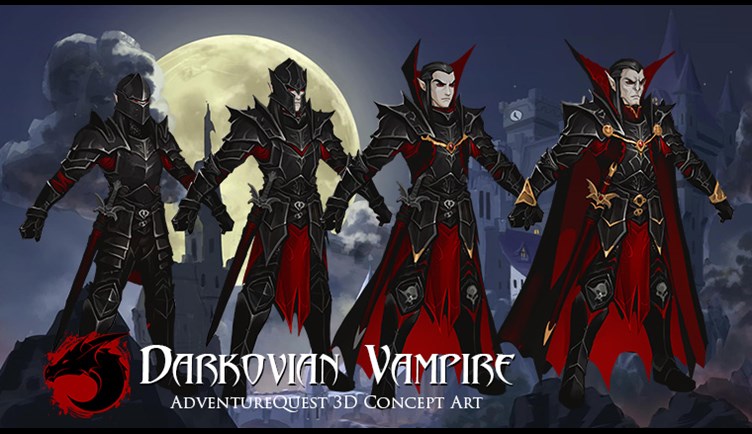 The Vampire vs Werewolf focused saga was originally slated to be released over 3 releases. Realizing we are already at the end of October and not wanting to sacrifice any of the story by rushing it, we are going to *coughs* increase it to 5 releases. Wait... WHAT!? I know, that sounds crazy to increase the number of releases. However, by releasing the story arc in 5 vampire-fang sized bites, we are going to try to set a pace and tempo of releases that we can keep up with steadily.  This means Darkovia will begin on Halloween/Mogloween and then continue through November alongside AdventureQuests 3D's other features and content-- including the highly anticipated new classes and The Dragons of Ashfall: Part 3.

What level will Darkovia be?

We are very eager to raise the level cap. The epic boss fight in The Dragons of Ashfall: Part 3 will increase the level cap towards 20. Which puts us in a sticky situation for Darkovia (Which was actually not intended until around level 35). So, for this question, I ask that you stand in my shoes and imagine you are responsible for making sure all players have something to look forward to. Here is our dilemma. Long time players will want the new content to be level 17-20. But the items you get from this release cannot make you overpowered for the upcoming Ashfall's Boss Fight. Which means, no matter what we do, it cannot be higher than Ashfall's content for THIS release. We could make Darkovia  somewhere between level 8 to 15. But obviously that has no value for the higher level players (unless we add max level challenge fights.) It would help newer players that are struggling in the old content that has not been updated like Greenguard was yet. Finally, we could have Darkovia (or parts of it) scale to allow all players in. However, we just came off of two completely scaling releases, and may players (and the team) feel it is time to put more permanent content in the game at a specific level. I need to make the final decision soon, and would very much like to hear your input before I do. You guys are really clever, and because you have been playing so diligently, some "thinking out of the box" ideas may just pop :D

The stakes are high and unrest assured that there is no silver lining to this cloud of impending doom.