I think it is about time the Rogues get dual wield. Which makes those new starting stabby things that Dage painted look even cooler. 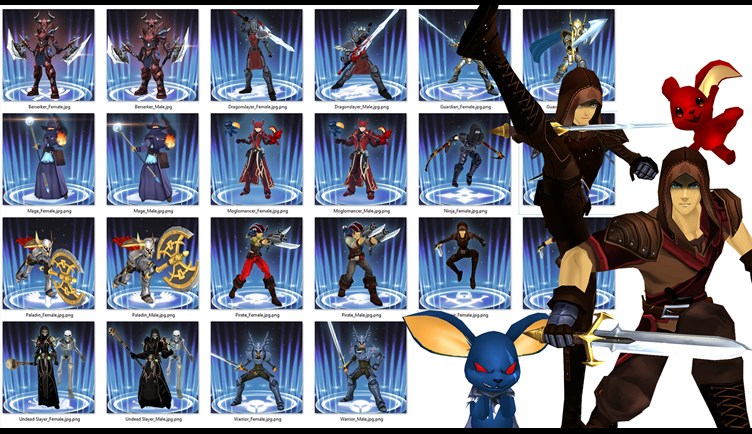 So, I was working on the class pictures. You know, the pictures you see when you are switching classes. Currently, the art is all over the place. Some are painted pictures, some are posed game characters, some are... I do not even know what they are O_O. You said you liked the new Berserker one, so I made them all look like that.

We geared up NPCs wearing the default class armor and any suitable class related weapon. I was so preoccupied getting the new screenshotter tool I was using working that I did not notice a few things.... like, why are the ninjas duel wielding scythes? How come NPCs cannot actually dual wield? How come Moglomancer has no weapon? ....and why would a Rogue choose to only wield one tiny little dagger!?

If you are long time player of AdventureQuest 3D, you are aware of a lot of the weird features. You might not know that NPCs cannot duel wield. (At least not yet.) So when I equipped the pew pew cannons on the Pirate, I had to manually duplicate the weapon and place the second one in their backhand for the screenshot. But... I did not have to do that for the Ninja. That weapon is flagged as "dual wield" in the database. So even though it is an NPC-- it equipped it in both hands O_O. The amount of customizable freedom we have in game is great. But some parts of it are so weird! LOL. And it is about to get weirder...

That is what I posted into dev chat, which rekindled the flames of old conversations on the topic. We can just summarize....

We should just make them dual wield....

I have been playing through the intro.  A lot.  A WHOLE LOT. O_O

The Mage & the Warrior class feel really good. The Rogue could really use dual wield to make it feel solid. Especially when using the new daggers they get at the start of the dungeon. I would prefer that Rogues ONLY dual wielded daggers. That is, if you equip a sword, you just have one sword. But if you equip daggers, you get one in each hand. But, surprisingly, it would take a long time to implement this. We would need to change the database, add meta data to our weapons that does not exist yet, and update the game client to support it and show it. Alternatively, we could just make all of our dagger/knife weapons dual wield... then ANYONE who used them would have one in each hand. Which is also a pretty good solution.

So it really comes down to... make some daggers dual wield, or just make rogues dual wield all weapons. What do you think?

Also, about that intro

In between working on heartwood, we have been working on early game improvements too. We created new starter weapons for each class that match the new quality of the game. Also, your 1st armor drop in the tutorial was a helm. Which was silly because it covered up all the work you just put into customizing your face. So instead, we built a some new underworld-ish shoulder armor that looks good with all three classes. We also brought the skeleton's art up to speed with the rest of the game.  Considering how often skeletons are used across the game, that was one small improvement that gave the whole game a visual buff. We also adjusted the giant door's hitbox. Watching some streamers play, I noticed that if you turned off "auto run to attack" it was very hard to actually attack the door. The completion rate of AdventureQuest 3D's intro was already really high (85%+) but I would very much like to see it hit 90%. I will throw you a party if we do.

Which brings us to what happens after the Intro

Now, I apologize... there are a dozen people working on new areas and features for AdventureQuest 3D that are all WAY more interesting than what we are talking about here today. (Unless you main the Rogue class, in which case this is EXTREMELY important.) We will talk about them later this week. Ooh, maybe we should do some staff interviews and show off their stuff. I do appreciate getting to make a post when we talk about the little stuff. I think we need more of these.

So, back to what happens after the intro. We are working on both end game content and early game stuff at the same time. Not just to improve the game for new players, but to give the whole game a better structure. I am helping Entropy work on the new Adventure Menu (aka Book of Lore phase 1). It will let you know where you are through the story and give you access to challenges. But the one thing this does not fix, is a rough patch our game hits when a new player goes from the Intro to Town. That is, they go from a straight, singleplayer dungeon... to suddenly being in a multiplayer town with TOO MANY options of things to do, and no explanation. So, I would like to try a few things to fix this.

In most cases, it is better to try something fast and see if people like it. If they do, you can go back, polish and improve... then make a lot more of it.  In the past we did these huge full releases that took tons of time, and then when some of them did not work... it was really emotionally crushing. Felt like we wasted that time. And no one wanted to do that again. Because it is really painful working that hard on something you have to scrap and do again. If you did not know-- we are actually human.

You hear this term "Fail Fast" a lot in the tech industry. Which DOES NOT mean give up. It means, just keep trying stuff until you find the one that works. One of my favorite quotes is "The Master failed more times than the student has even tried." So, messing up is a vital part of getting to your goals.

Which is why I think we should just turn on Dual Wield for Rogues.

QUESTION: Should we flip the switch?