Item Infusion is our newest and most exciting feature in AdventureQuest 3D. It’s also a little complex... So Blaze, the dev behind it, shared the details with me (Glisel!) in an interview.

Glisel: I don’t think you have been formally introduced to the AQ3D player base. Would you like to talk a little bit about how long you’ve been working for Artix Entertainment and what you do?

Blaze: Umm.. Yeah. I’m Blaze, I am a game designer here at Artix. I joined about ten months ago. I do a lot of programming on the backend and a lot of game design. I help a lot in the class department, I also do a lot of system design. I was responsible for adding power offsets, ranks to 100, daily tasks, Item Infusion, and worked a lot with capstones as well. And, of course, I designed Big Bad Blaze.

Glisel: Today we are going to talk specifically about Item Infusion… or item fusion…?

Blaze: I actually didn’t know about item fusion. It’s kind of funny that I came up with it totally independent of that.

Glisel: So… What was, or is, your goal with this feature?

Blaze: The goal is to… give players something to do at endgame and reward them for logging in every day and really staying dedicated to the game. This is for the hardcore players who want better stats. Now they are able to do that with Item Infusion.

Blaze: It is not staying. It was doing that so we can test. It is a system that you can infuse at any level you want. So if you’re level 10 and you want better stats, you can do that. This system is an upgrade to the power offset system that I created a while ago.
Some people were confused by the plus on an item. It increases the power of items when they drop from NPCs. So, like, a level 15 item would have a certain power of like 100, let’s just say. If you were almost level 16 and killed a monster at level 15, it would drop an item at the power of almost 16. So it would level with you. So that’s what the pluses were. Those are staying but you can now use the infusion system to top it off.

Blaze: It gives the players a little more control.

Glisel: So, what are the materials and how do we get them?

Blaze: So, there's kind of two different classes of items. Items that are not endgame and items that are. Items that aren’t, you just need the item and gold. For endgame, you’re gonna need Inert Runes, Capstones, gold, and the item. You're gonna be able to get Inert Runes through completing your daily tasks, you get capstones through going over your max level, and you get gold by… well, how you normally get gold.
So then you’re going to take the Inert Runes, Capstones, and gold to Maximus. There you can smash them all into Infusion Runes. Then you’re going to be able to use the Infusion Runes in the new infusion UI which is also on Maximus. You just select the item and hit Infuse. Boom! That easy. 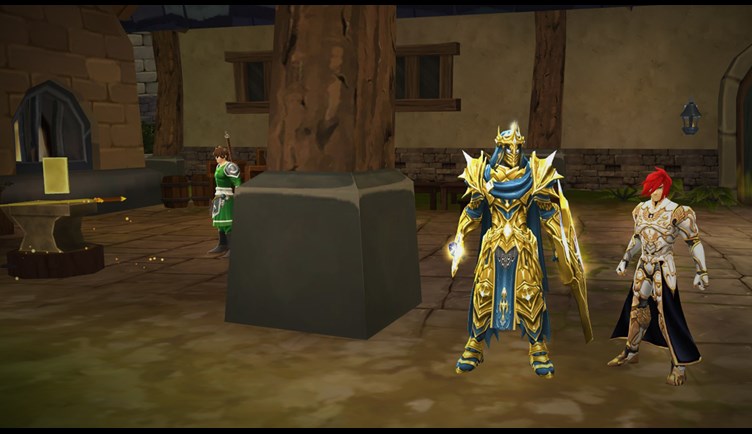 Glisel: So Maximus is replacing Cysero? In the same area as Cysero?

Blaze: I think he’s in the same area and, according to what I was told, he is going to be wearing the Best In-Slot set. (Confirmed!)

Blaze: The items that give you the best stats for each slot.

Glisel: So this isn’t meant to be a quick shortcut to getting more powerful items.

Blaze: No, not even a little bit. This is the grindiest of grinds. This is for like those hardcore players I was talking about earlier. This is not going to be a short process, but if you do make the trek, all the way to +20 (the max), you can truly claim to be the most powerful person in the game.

Glisel: Alright. Is there anything else you want to say about Item Infusion?

Blaze: We haven’t covered Extraction yet, do you want to go over that?

Glisel: Oh! That’s the other side of Item Infusion, right?

Blaze: Yes. So Extraction is basically, if you have an item you infused with runes, we wanted you to be able to take the runes out and place them in a new item. The number of infusion slots will increase whenever we release a new challenge fight or other big content that has epics. They are going to have a higher possible offset than the older epics. It might be +10 at the beginning, then it will be +15, then +20, and hopefully after that it will be going to the next level for endgamers.

Glisel: So how does Extraction work?

Blaze: Very similar to Infusion. It’s in the same menu. Just hit extract instead of infuse. It will show you how all of your stats will look without the runes and then you will get all of your runes back.
This does cost a little gold.

Glisel: So, if you are level 33 now and have capstones but want to go into the new release with better items, you can go infuse those with runes and then when you hit level 35, extract those runes and put them in your new level 35 gear? Is that right?

Blaze: No... You got a couple things wrong.

Glisel: Oh! What did I get wrong?

Blaze: Well, first, the level cap is not the same as endgame. Endgame is 35. 33 is our current level cap but 35 is our end game. So if you have a level 33 item you want to infuse, it will only cost gold. When you reach endgame, all of the level 35 items will be endgame items and cost runes. And the capstones are going to be changing at endgame. Second, there is now going to be a new type of capstone, Sandstorm Capstone, a regional capstone used for sets specific for the area. There are going to be Sandsea items that are going to need Sandstorm capstones to infuse. You are going to need Sandstorm infusion runes for that too. The infusion runes are going to change at each endgame as well. We want everyone to be on the same playing field when we reach a new endgame level.

Glisel: Okay! Is that everything?

Glisel: Thank you so much!