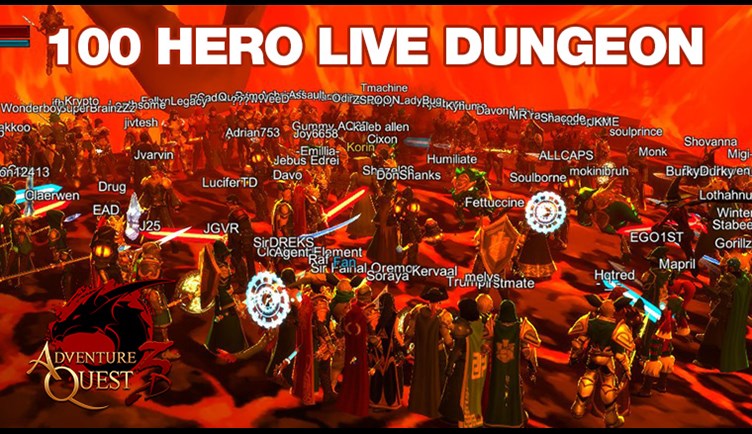 3 of the BEST AdventureQuest 3D stories from MegaCon

"This may be a gaming first!"

One my my dreams for AdventureQuest 3D was to be able to host a panel at a convention where I took out my phone and said, "Excuse me everyone... please take out your phone and join me in this dungeon."

As of this weekend... IT HAPPENED!

As usual, our AdventureQuest 3D panel was loud and crazy. So loud that the 20 people who went to the wrong room could still hear us (A voice actor from Futurama was next door-- a bunch of people ended up over their because the contention's official booklet has the wrong room number for our panel.) The next day tons of people came to our booth asking what happened to our panel. I said, "Did you not hear us next door?" And they all pretty much responded, "OH! That explains all the laughing and yelling and we heard... what were you guys doing over there!?" I normally responded with a blank stare and whispered, "Few survived to tell the tale O_O" 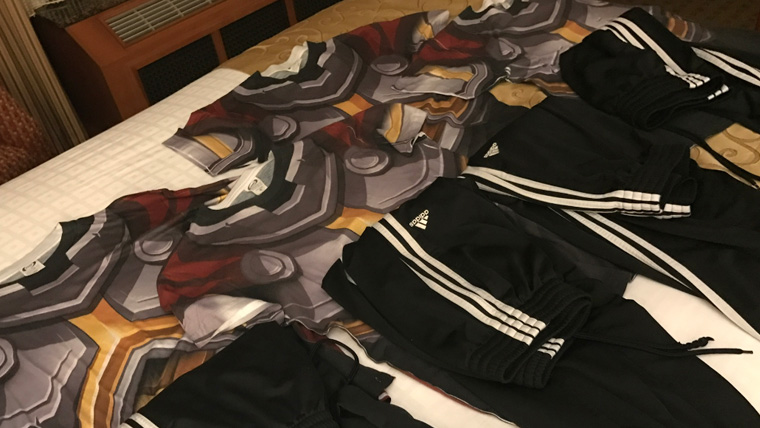 "OMG! Which outfit should I wear to the panel!?"

The day before, after a 10 hour shift running the booth, I stayed up until 1:30am creating a 100 slide presentation. Nothing like waiting until the last minute! Except our internet went out and I was unable to register the software I was using to save it.... (talk about panic). The guy in charge the audio/visual equipment overheard that I had a 100 slide presentation and thought I was crazy... (also worried that he might be working until midnight as a result, lol!) ... but the pacing was spot on and we hit the forbidden 100th slide in only 45 minutes... meaning it was time... for... THE LIVE DUNGEON.

Yergen created a 100 person dungeon
Yergen had created a special 100 player dungeon for me. It was a huge hall, and only had one monster in it. Honestly, I did not think it was going to work. The cell reception / internet was so bad at the convention that kids using two paper cups with a string between them were getting better download speeds. But when I asked everyone to take out their phones and join me... no one hesitated. 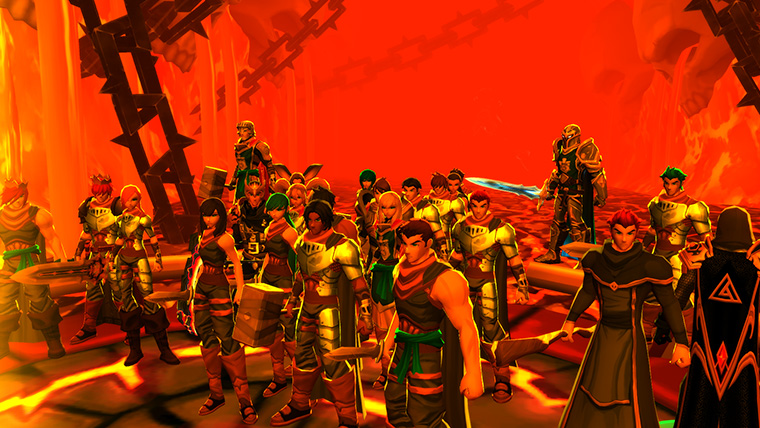 Boss Monster defeated in seconds
As players logged in we sat and took a group selfie. We were almost ready when someone yelled "LEEEERRRROOOY JENKINS" and ran towards the boss. Everyone followed. The first boss monster dropped in seconds....

Live Spawning Monsters!
Using the mod-only spawn command I started summoning new monsters for them to fight. But I was so shocked and surprised that it was working.... that I could not remember any of the monster names! (Ever freeze up like this in real life?) Lucky a few minutes after the horde of heroes watched me staring at my screen with a blank face, long time player Roshuno ran up and gave me his phone with the AQ3D monster wiki page open on it. Monsters swarmed the map... players fought tooth and nail... and those without phones watched it happening live on the screen. Players from inside the game someone found out about the room and started entering.

Has anything like this every been done before? A live event in an MMO... where people took out their phones and hopped on? It may have been the first, but it will not be the last! Just imagine... being a part of something like this in person or at home on your phone, tablet, PC or Mac? This day... we truly changed the way we play together. 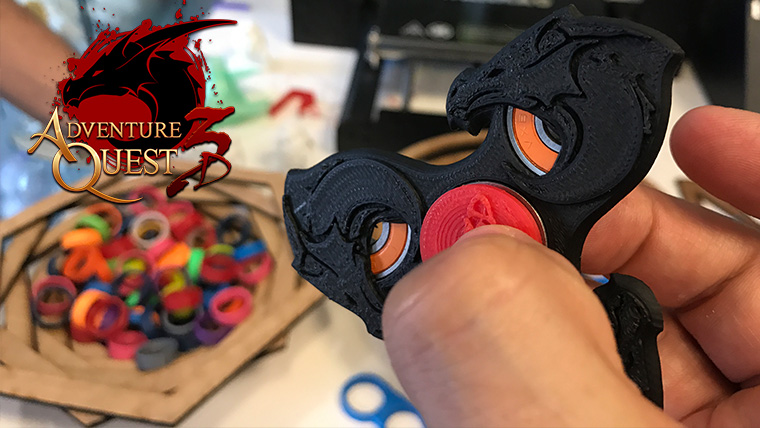 Story #2 - Spidget Finners
Actually... this story is about a cosplay girl that came to our booth. She was not happy to be their either. When I said hello to her, she cut me off by raising her hand in a defiant wait as she continued staring at her phone. A few moments later, she looked at me and said, "Do you have some sort of a fidget spinner with a game item code?" I started to say yes, but then she abruptly groaned and went back to staring at her phone and typing with a grumpy ferocity. Using my stealthy ninja-like powers I glanced down at her phone and instantly understood the situation... she was talking to one or more of our players on Discord. It appeared that they "hired" her to come to our booth and buy one of our AQ3D Fidget Spinners-- you know,  in order to get the code. She did not seem happy about it X_X. My guess is the player(s) on the other end of that chat were being a bit indecisive-- because she kept getting angrier with each passing moment.

We were completely out of our Spinners by mid day Saturday. They were custom designed by Xero, and we 3D printed them at a friend's shop. They were really popular at our booth, everyone kept saying, "These are really smart!" -- which seems like such a weird thing for multiple people who do not know each other to say. I think we "broke even" on them. I gave one to one of the other vendors who's son is autistic and showed genuine interest in it. I gave my personal one away at the panel through a 20+ person "Paper, Rock, Scissors to the Death!" match. Three did not meet our standards for being sold (Translated: Artix and/or Stryche broke them) and we only had 17 with us. If this was the official battle test for the spinners, I would say that 3D printing them is not good for making large quantities. They are fine if you want a unique collector's thing, but I am uncomfortable putting them on HeroMart unless we get them properly manufactured... which will take forever. I am going to meet with the team on this early next week to see what options we have. If enough people want them we can probably do a massive pre-order to get funds to make them.

It was a smart TV. But apparently not smart enough to stay home. >_> Because the convention was only 1.5 hours away from the lab, we decided to bring a TV to show the game's trailer at the booth. We are not actually sure how it happened... but I must have brutally smashed the screen to death when loading it in the car. 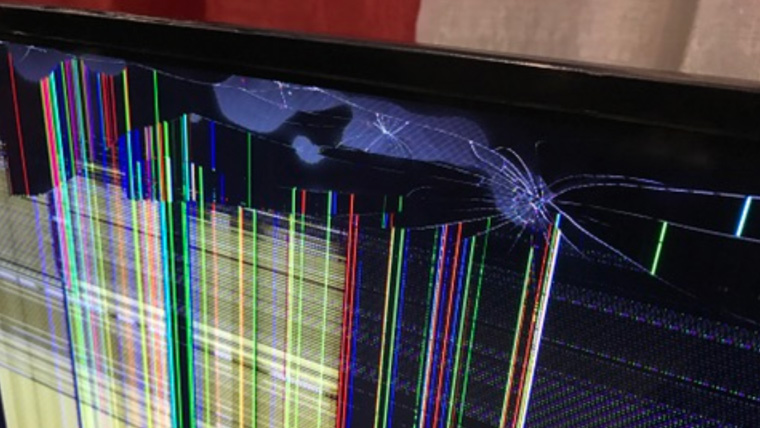 I was pretty heartbroken about this. See, this was the TV that I got specifically to play DragonBall on loop non stop for my 2-year old son as a psychology experiment. I will just have to teach him the Kamehama wave myself now... *rolls up sleeves* "It will take you 50 years to learn the Kamehama wave..."

Fortunately, I brought the project too... so at least we had something to use as a backup.

BONUS Story #4 - Epic Rare WHOOPSIE!
"Unlike the TV, at least this one was easily fixed."

The first day of the convention was full of chaos. (Not the purple kind, the normal kind) To thank some people who went out of their way for me, I asked for some items I could give them. There was a terrible miscommunication O_O... and I foolishly dumped forbidden rares on three people. I know this for a fact, because by 4am the next morning, I was getting urgent, panic-filled text messages. Cysero called me and yelled at me for about an hour... and when I explained what happened he said he would help me fix my mess. Some time later he sends me a image of a full armor set and Scythe called "Artix's Golden Direwolf Item Set for Friends." You may not know this... but Cysero is actually making fun of me with this set (but that is a story for another time.) He said I could do anything I wanted with these items... AND ONLY THESE ITEMS. (I get in so much trouble!)This is a special set of items I can give to whomever I want for any reason. Usually,, I will give it to someone who I think has earned it by helping our online video game community in some way, but I may give it out for any other reason I like. Sometimes I will only give a single piece of the set and sometimes I will give out the whole thing. There is only one rule: No one who asks for it will get it.

I guess that is OK, because only a day later Xero discovered that 100 room dungeon and thought it would would be cool to spawn some monsters for players... but it is really easy to mistype a monster number-- and he spawned a rare chest. If you have been following Cysero's Twitter you can see the daily punishments he has been inflicting on Xero... in my opinion, leaving sausage in a hot Florida car all day is far worse than death!

OMG... we are scheduled for "Anime Festival Orlando" in a week. *falls over*

We are going to need more TVs...