We are changing the flow of our quest system to allow quests that span the world. The team is putting this improved quest system for testing on the PTR (Testing Server) later today. We would love your help testing. Here is what to expect... 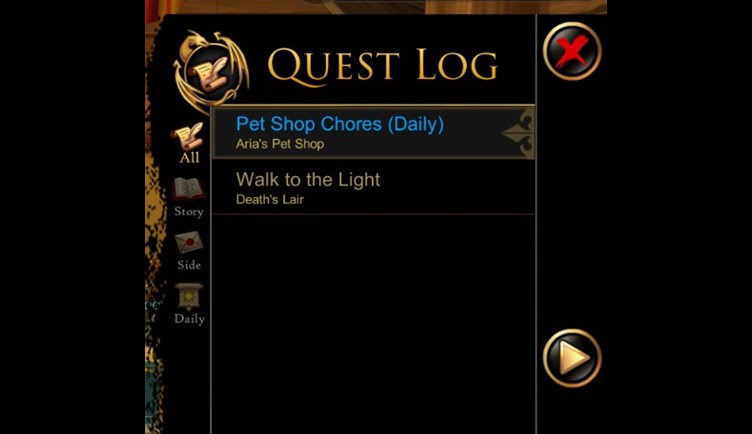 Your quest log will now contain tabs for all, story, side, and daily quests. 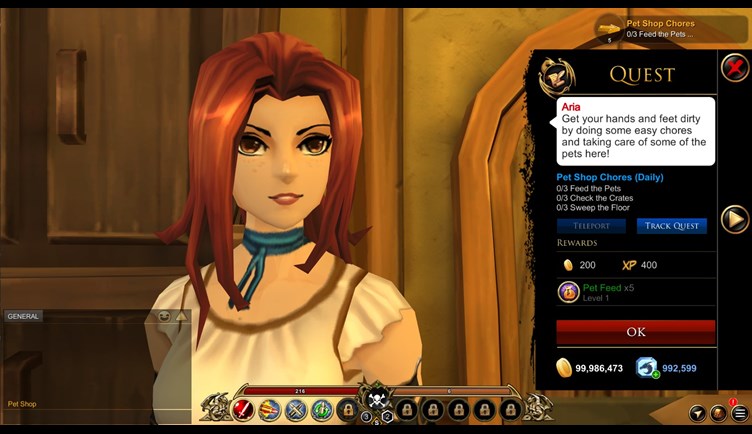 The original design for AdventureQuest 3D envisioned the world as a series of self-contained stories. For example, all of the Dragonslayer Saga quests happened within the dragon infested volcanic region of Ashfall. It was a great idea in theory, but with our new town and growing world it became painfully obvious that we need the ability to have quests of all types take us anywhere and everywhere. So we made it possible. You can now set any quest as your main quest and know exactly where to go to do it. 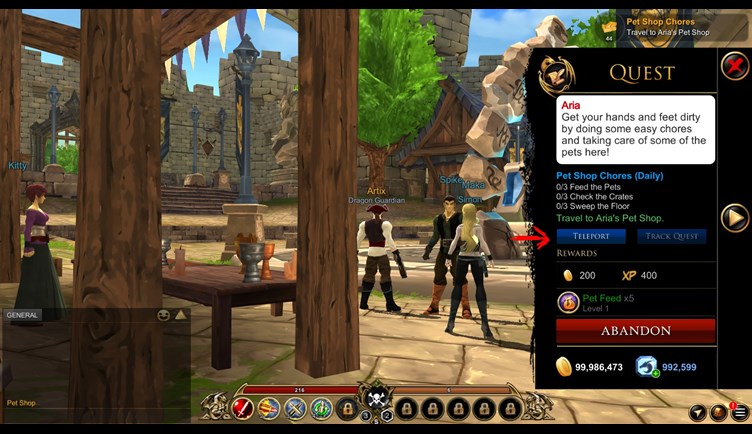 OK, let's say you started a quest a while ago but then went and did a bunch of other stuff. Not sure where you need to go to complete a quest? Hit the Teleport button. 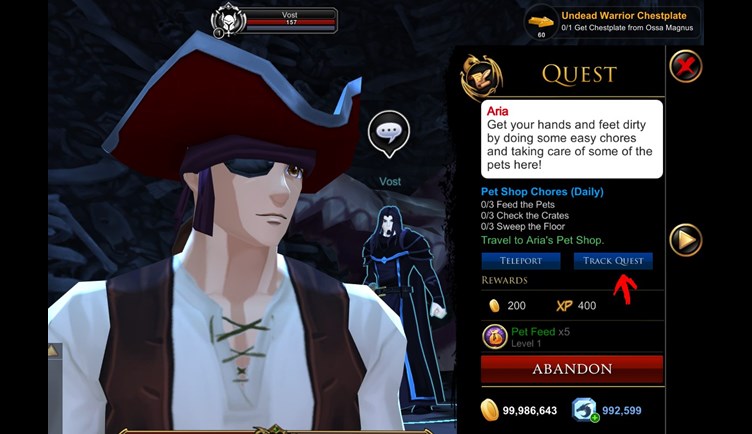 Is there a better term than "Track Quest" to make something your main quest? Clicking on the Track Quest button will put the quest at the top of your screen and make it your main quest-- no matter what area you are in. In the screenshot above, I am in the Underworld on the "Undead Warrior Chestplate" quest. But I open my quest log, click on the quest from Aria's Pet shop and click Track Quest.... presto! 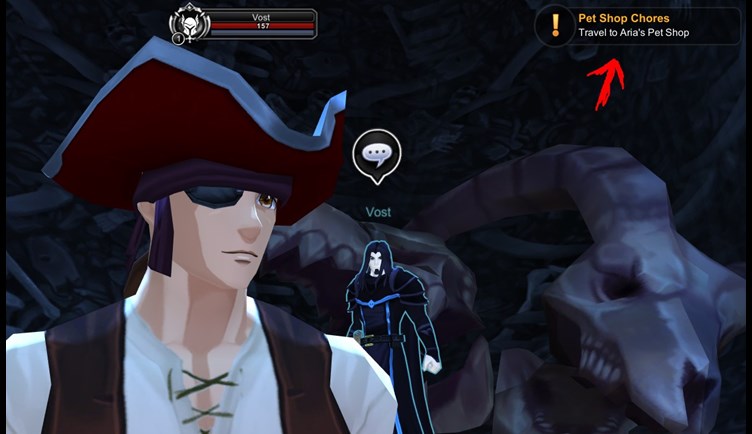 Now my main quest is "Pet Shop Chores". I can easily click on it and teleport to where I do the chores (Not so surprisingly, it will be Aria's Pet Shop) 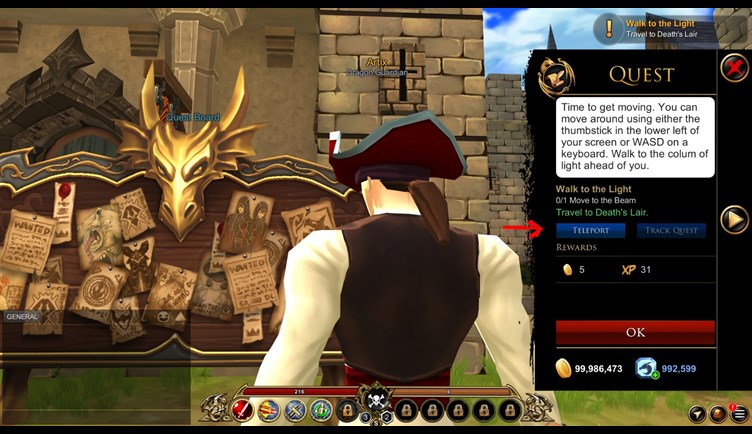 This is going to be GREAT for things like the Quest Board which will give you quests to go all over our expanding world. It should be noted that in the screenshot above, I teleported a freshly created character to the Town of Battleon without finishing the tutorial quests. In the old quest system, it would have been impossible to find how to get back. But now, the tutorial will remain as your main quest helping you get back. Unless... you really don't wanna-- in which case you can just switch your main quest to be something else XD 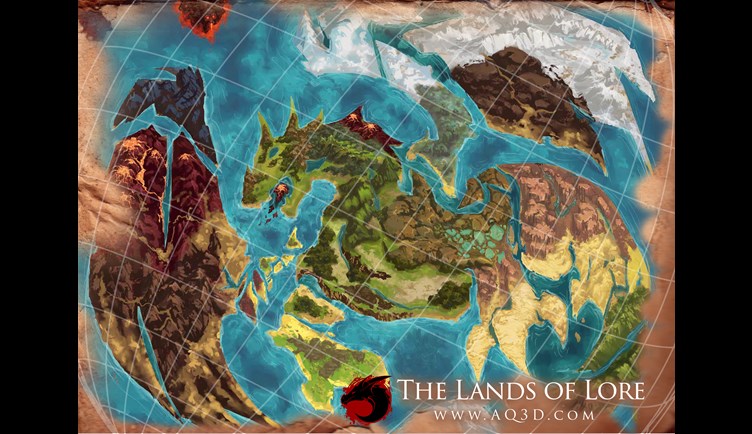 Thoughts on Quests and Stories... and your travel crystal shard

When I originally laid out the story structure for Darkovia, both Cysero and Yergen gave me a deeply concerned "WHAT!?" look. It was for a good reason. In order to tell the story of the town, the vampire castle, and the werewolf coliseum, we needed to weave three separate quest chains together seamlessly. I REALLY wish we had this new system back when we started. (So do they.) If you played through, you probably noticed the way the town's quests sorta handed off the story to the Vampire Castle's Quests which then magically went back to the town's quest. This is exactly the type of problem this new system will fix. Because now, we can have a story take you though any and all areas of the game smoothly.

Phase I of our new map is coming too. This week I have been working with the team on locking unexplored locations. Once complete, players will have to either explore a place on foot (or reach a specific level) for a new area on their map to unlock. Once you have unlocked a new location, the travel crystal will allow you to instantly travel back there. Which seems fair. One of AdventureQuest 3D's goals is to allow players to instantly jump into adventure. Because if you are on your cell phone, you do not have much time on those potty breaks XD. Better to spend it fighting bosses than unnecessarily re-walking through areas you have already explored.

The coding team will be uploading this to the PTR (our Public Testing Server) tonight for you to try out. We will need  a lot help getting feedback and solving any oddities. One thing we WILL have to do is go back through Darkovia and re-weave the storyline with the new system. As you expected, changing the core way the game works to this new system was not easy. But oh boy is it going to improve the way we are able to tell stories across the world.