PvP is coming your way soon after successful surprise test on Dage... but now, he is on the loose.

The newest version of AdventureQuest 3D (1.19.3) went live on Friday. In addition to fixing a bunch of issues from that combat lag bug to login issues it also included some of the PvP code the team is working on. Although, not EVERYONE on the team was told about this XD... 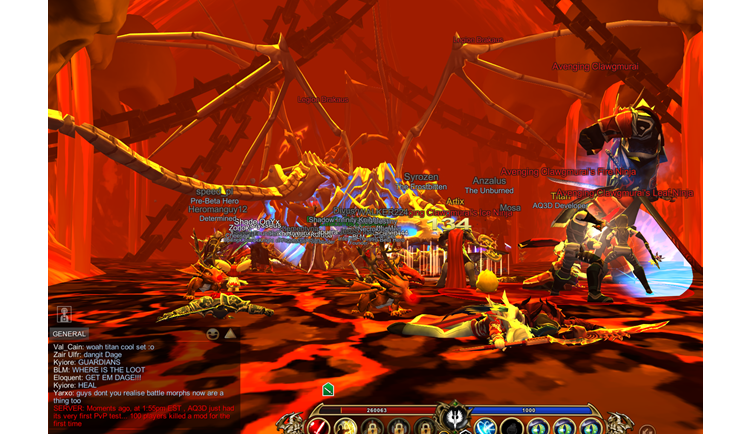 STORYTIME! THE TALE OF DAGE VS. 100 PLAYERS

Nearly ever day, since we started making PvP, Dage has asked, "Where's my PvP!?". As a long time player you probably are in on this inside joke. If now, you are now. You can even hear him asking in a dozen of our random videos. On Friday... we gave him exactly what he wanted. We just did not warn him first.  <_<

So, on Friday, Dage was painting an undead horse when I asked to urgently log in to help us test something. Oishii, Zhoom, and the entire AdventureQuest 3D room was giggling. He logged in to the /join 100 room... you know, the room that fits 100 players. And oh yes, there were 100 players there waiting for him. Dage's character was PvP enabled. Which meant he saw every player's name as red... which means attackable, like a monster. And ALL 100  players saw Dage as red... which means he was attackable. Like a Monster. XD

The room erupted into a 1 vs 100 PvP match immediately. Even though Dage was level 100, his health was dropping faster than the value of Bitcoin. At first, players did not realize it was not a monster. We did not tell anyone there what was happening either. We just trusted that when they saw a red-named Dage they would know what to do. Dage did every trick in the book... from spawning clones of himself to confuse to-- well, let us just say Dage never holds back in combat.

There was something missing though.... the Lag! Combat was smooth and fun. We had fixed the combat lag bug during Thursday's Heroes Heart day live-events. If you want a techie explanation of what happened let me know. But the important thing is the lag is fixed.

So, finally, after all this time, Dage got to experience the epic awesomeness of our PvP… except he was the one on the receiving end… O_o

After many respawns and lots of lulz, we can officially say PvP is working and will be coming soon! When we fix a few more things with it, we’ll announce a rollout date… so that all of our players can enjoy choosing to battle each other in the new Kingdom of Battleon's upcoming Battle Arena.

Until then... BE WARED! Dage is permanently enabled for PvP. So if you see him.... be careful. He usually does not attack unless attacked first. *gulps*