Secrets of the Samurai

Samurai has finally slashed its way into Lore, wind and blade in tow. There’s a lot to be excited about here, first of which is a new class!! But a new class doesn’t mean what a new class meant before. We are trying a new approach moving forward to really bring this class and future classes to life.

In order to achieve this, we have changed our process of forging classes. Since there is more than one side to each class, there should be more departments than just the coding involved. We implemented an approach called Design Narrative and Art, or DNA for short. DNA is essential to making sure that every aspect is cohesive and high quality, everyone is on the same page, and nothing gets left behind.
We started by grabbing the departments and brainstorming. What is a samurai? Who are the Samurai? What do they look like? Why do they exist? What are their values? What do they play like? All things that needed to be answered to really make the Samurai come to life in Lore. After that, we solidified it, and immortalized that in a short summary, but also, concept art. 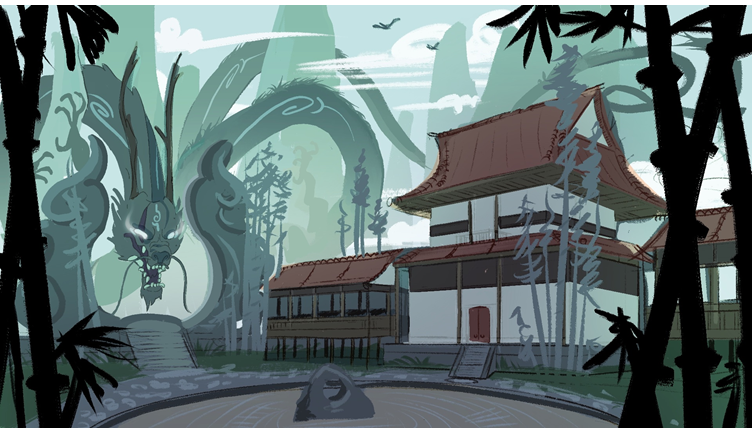 This was the first drawing of the Samurai concept. We wanted it to be in Yokai of course because of the obvious similarities, and this gave us a chance to expand the lore a bit. We won’t go too much into detail about the story since we don’t want to give any spoilers, but just know there is a LOT. Some of which is explicit in the storyline, but some of which is only hinted at… This is a concept sketch of Wind Dragon Ryukami ruling over his secret island, complete with a training dojo and garden rock! This piece of artwork really helped us set the tone for everything we did after. It was really easy to visualize where we were going. All working towards the same goal in all DNA regions. 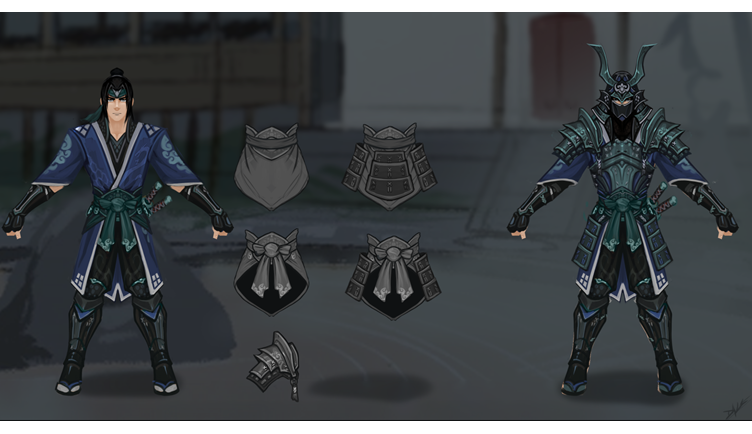 Then we had early armor sketches! Dage was spearheading the armor department and did phenomenal work. A lot of the armor inspiration was drawn from historical Samurai from Japan. You can see it all the way through from top to bottom. He said to get into the zone he would listen to Japanese taiko drum music. He’s always going the extra mile.

In early development we were split on what the samurai should be. Should it be a traditional samurai? Should we embrace the dragon and go full dragon samurai? We couldn’t decide… So we did both. With the release of Samurai you’ll notice we released a class skin as well, “The Dragon Samurai”. This skin’s armor is much more draconic, and the class skill fx are reimagined to reflect the gold glint of dragon scales! 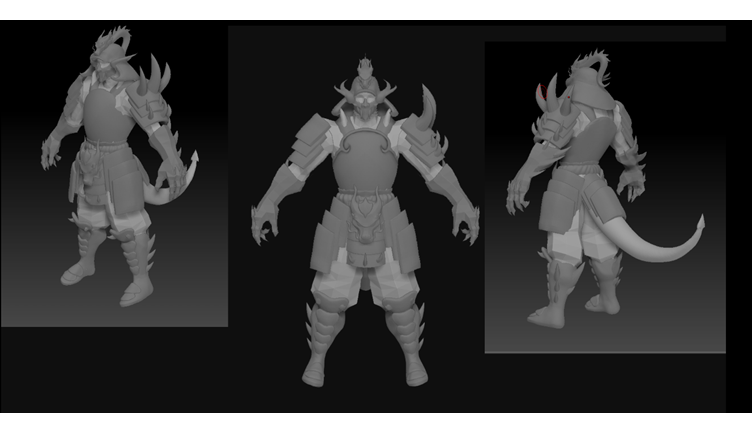 The mechanics are heavily anime inspired. Whenever we talked to anyone for feedback one thing came up over and over again. The samurai had to do a single cut and the fight had to be finished. We originally had the ult as a 2 press ability, one where you charged up and the second to deal one final strike to finish them. Unfortunately the feedback was not good for this in broader testing, the 2 casts of the ultimate felt like too much of a departure from the rest of the cast so we went back to the drawing board.Then an idea came to us. What if they could always do that ultimate slash, but it wasn’t an ultimate? After all that would give the samurai feeling more often. So that’s what we did and Nothing Personal (the 4 ability) was born.
The ultimate was still a problem though. We needed it to feel ultimate-y but we already captured the essence of the class in the 4. So we made the ultimate go crazy, giving you a massive haste increase boosting the strength of Nothing Personal. After all, you are blessed by the wind so it only makes sense that you hit fast, eat hot chip and execute.

The last thing players are probably wondering about is the passive, Breath of the Wind. Breath of the Wind is a stacking buff that can give a maximum of +100% attack and +200% attack speed. Those are big numbers, but we wanted the payoff to be big for getting there. The samurai had design goals of being a sustained dps that ramps up the longer you’re in combat. This is how we achieve that, but it does come with drawbacks. Because the samurai wants to stay in combat, it has a lot of mobility options, ways to stay in the fight and ways to get out in a pinch, but it doesn’t have any crowd control (CC) options, and that’s on purpose. While it’s fast and hits hard, it also can’t stop opponents with anything other than death, the greatest of CC’s, so be sure to use your skills wisely!

Thank you from the team

All of these different teams worked extremely hard to bring you this class. We poured our heart and soul into every aspect, from the animations, the armors, the story, the sounds and mechanics. This wasn’t without our blockers, as you know our team isn’t the biggest and we have lots of content to deliver to you, as well as a hurricane that you might have heard about. Regardless of what was in our way though we always push through, for you guys, the players. We really hope that you all enjoy it as much as we enjoyed making it.