A SANCTUARY FOR ALL!

The Founder's Sanctuary is now live! Every hero deserves a break so this small area is a floating sanctuary from the troubles of the world.

We were calling it the Kickstarter Area but that was too limited. It serves a variety of functions for lots of different players. People seem unclear on its purpose so here's a quick Q&A.

Q: WHO CAN JOIN THE MAP?

A: Anyone. You do not need to be a Founder, Kickstarter or Alpha Knight or anything special. Any player can go there. 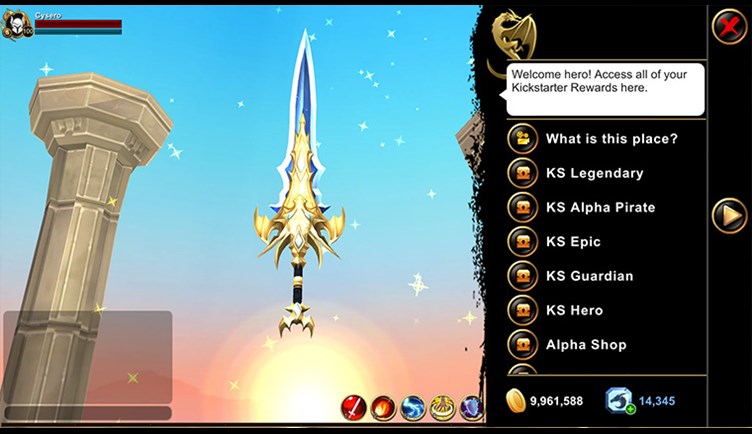 A: This is the new home for the Alpha Knight Shop, Kickstarter Shops, Alpha Pirate Shop, and Closed Beta shops currently located on Melodia in Yulgar's Inn (You can't see them if you do not qualify). This will also be where the Kickstarter Design-A-Weapon Backers will be able to pick up their custom designed weapons. Anyone will also be able to tap on the Book of Credits which will load our credits page with Kickstarter Names on it.

These shops are Smart Shops and will not appear for you if you do not meet the requirements to open them.

The Alpha Knight quests are STILL located on Melodia.

A: Melodia in Yulgar's Inn has buttons that will take you there or typing /join Sanctuary in your chat bar will work too.

A: Nothing. The term "Founder" is a catch-all term for many, many players, from the two guys who paid $5000 to build their own areas in the game to our beloved Guardians all the way down normal players who just used a free code to get early access and a promotional item or two.

Q: I'M A GUARDIAN, ANYTHING FOR ME?

A: None of the Guardian gear has moved. All your stuff is still in Guardian Tower with more stuff coming around Lore as the game goes on.

Q: I'M A NORMAL PLAYER. ANYTHING FOR ME?

A: You can look at the statues of our Weapon, NPC and Area Creation backers, view the book of credits or watch the pretty weapon spin on the dias. Otherwise, no. Nothing for a normal player to fight or buy.

Q: WHAT DO OPEN BETA TESTER'S GET?

A: Once we go live, we plan on coming up with some sort of reward for Open Beta testers. It might just be a badge but if it is a cosmetic item, you will also be able to get it here once we release it. 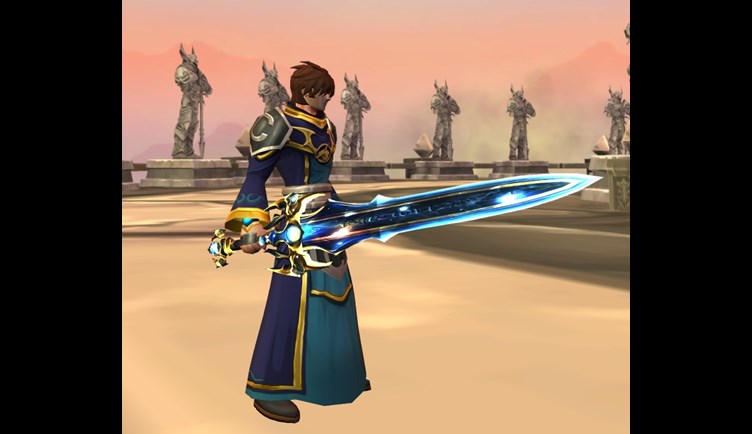 A: FINALLY! You get your weapon, assuming you completed your weapon worksheet. If you haven't had time to finish it yet, we will add your weapon when it's done.

When a Design-A-Weapon Backer enters the Founder's Sanctuary, they will see THEIR WEAPON spinning on the dias. Tapping the weapon opens all the shops that you can access including a special shop with your creation in it! You cannot access anyone else's weapon shops and they can't access yours.

This is only the first step in delivering your weapons. No particle effects have been added yet. Requests for particle effects will be honored and they will be added in time and eventually you will still receive 10 codes so you can give "Friend Versions" (with no particle effect) to 10 friends. If you wanted the weapon obtainable in the game, we have yet to add it there but we will do as we progress.

Please Note: This is a COSMETIC ITEM so you can show off the weapon that you designed to the rest of the game. It doesn't give you super powers or broken stats or anything. You probably already knew that considering we've talked about it, but I wrote that so everyone else will know too.

These weapons are some of the most creative and best looking items in AQ3D. It's been a pleasure working with all of you to help bring your vision to life! Thank you.

Q: CAN I GET THE BACK WEAPONS TOO?!

A: The Design-A-Weapon Kickstarter Backers were asked if they would like their weapon available to everyone or not.

Some of the backers wanted to keep their weapons unique. They were very generous in their support of the Kickstarter and if they want to make their item a One-Of-A-Kind masterpiece then that's their right.

Other players said that they would like other players to be able to get their weapon and let us know around what level they wanted it introduced, if it should be a monster drop, purchased from an NPC or crafted and how difficult it should be to obtain.

Each Design-A-Weapon Backer will also get 10 codes which they can share close friends. We will honor each of these requests as we continue to develop the game a deliver on our promises to the Kickstarters, but for now NONE of the weapons are available to the public.

Q: WHY AM I NOT IN THE CREDITS?

Q: HOW CAN I BECOME A KICKSTARTER?

A: Sorry but you missed your chance. Kickstarter is a website that runs crowd funding campaigns for various creative projects, including AQ3D. Our Kickstarter Campaign ended January 1st, 2016. The money that it raised went into developing the first 10 months of AQ3D. If you missed out or didn't know about it back then, sorry. The clock doesn't go backwards for most of us.

However, if you regret missing out, make sure to look out for when we Kickstart our NEXT game project, whatever that will be. We have no plans to start anything new, but AQ3D's Kickstarter was such a success and so much fun that we WILL do it again when we do begin a new project.