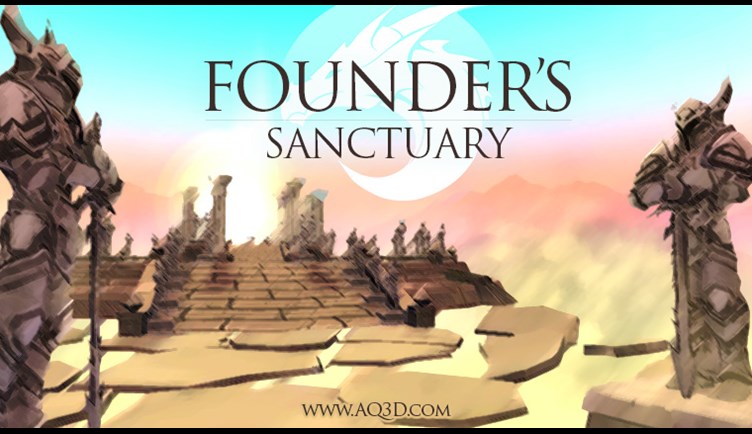 “The rumors are true! It's a beautiful place above the clouds… a floating monument to the heroes who made our world possible.” - Melodia, Yulgar’s Inn.

A single place to get all of your rewards

No more running around trying to figure out which NPC has which shops. Now Founders, Kickstarter Backers, Alpha testers, and Beta testers can get all of their current and future reward items in one place.

Credits! Honoring those who were there for us in darkest hour

The book prominently located in the Founder's Sanctuary will open the the official AdventureQuest 3D credits.

The first custom weapon backer items will appear in the game. Each backer has unique and special requirements about whether the item is unique, to be added to the game for everyone through a quest or other means, and/or they will be giving it to up to 10 of their friends. But before we do any of that, we are releasing the cosmetic versions of the 53 items to their creators first. This 1st wave will introduce half of them to the game. Once all 53 are released we will then give them the 10 codes to give to their friends, and any other special/fun requests.

About the Founder's Sanctuary

This is a quiet, peaceful, and serene place for heroes to get their items. There are no monsters and quests. (At least not yet.) This area will be updated. We are scheduled for the "LIVE" release of AdventureQuest 3D on Friday the 13th, this October (2017). If you are playing now, you are participating in the Open Beta-- and will be able to get your Open Beta reward(s) in the Founder's Sanctuary then.

Until Monday... BATTLE ON!