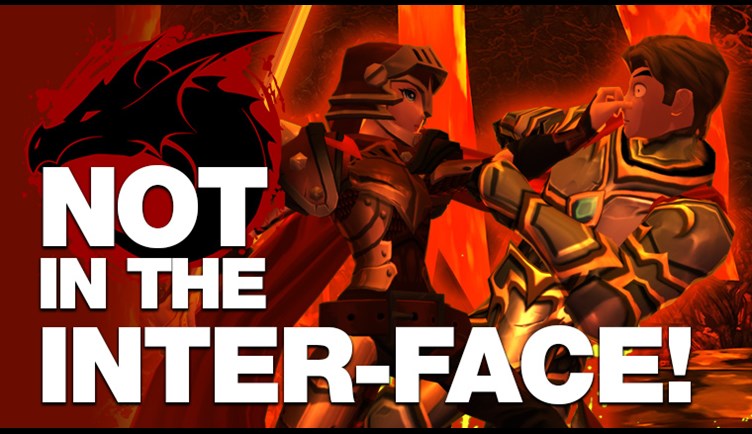 Oooh, shiny! Charfade is throwing a fresh coat of paint on AdventureQuest 3D's chassis. If you missed the rattatatat of my twitter posts, here are your behind the scenes sneaky peaks of what we are working on-- and our forbidden, deep, and top secret thoughts behind these excellent +100pts design decisions.

P.S. We are still working on these UI changes, so they will not go live until after 1.4 releases. 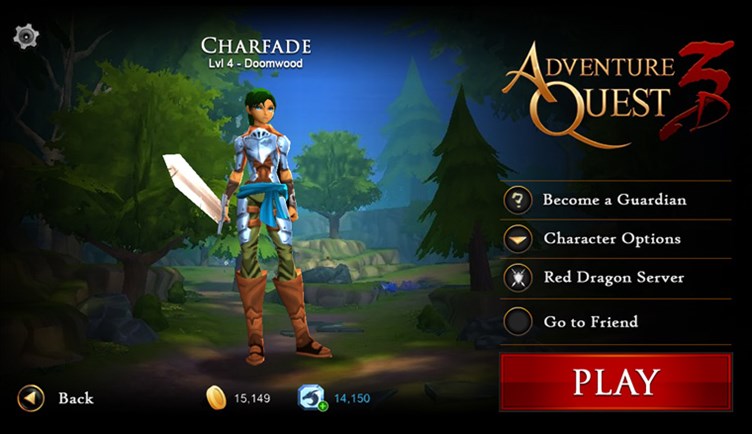 YES!!!!!!! So much better. Most of why it is better is obvious, so let us dive in a little deeper. First, I like the play button being right where your thumb is on mobile devices.

Quick Goto Friend
"Go to Friend" is a button that will take you right to your friends. Especially useful if a friend asked you to join them and gave you a Summon Word. You would simply choose this and enter your summon word to go straight to them (Instead of: 1. hitting play, 2. logging in, 3. closing the news, 4. choosing menu, 5. then friends, then 6. goto friend) With those extra 7 seconds of your life you could... uh... slaying extra monsters!

Making the Server Selection Screen OPTIONAL!
Also, you might have noticed the "Red Dragon Server" -- this is because 99% of the time there is no reason to actually go to the server selection screen. Since your character can log into any server, we will just automatically send you to the fastest. If you want to manually choose a server, you can just choose that option and select a server like normal. This also saves a few seconds when logging in!

Backgrounds?
Oh! We are not sure what the specifics of the background will be. It would be nice if we went with less backgrounds, but made them higher quality with some subtle animation. It would be EXTRA nice if we could also use the same background on your character's webpage. Panic Pop has a good portion of the WebGL version of the web page working... which will actually let you see your character on the web. 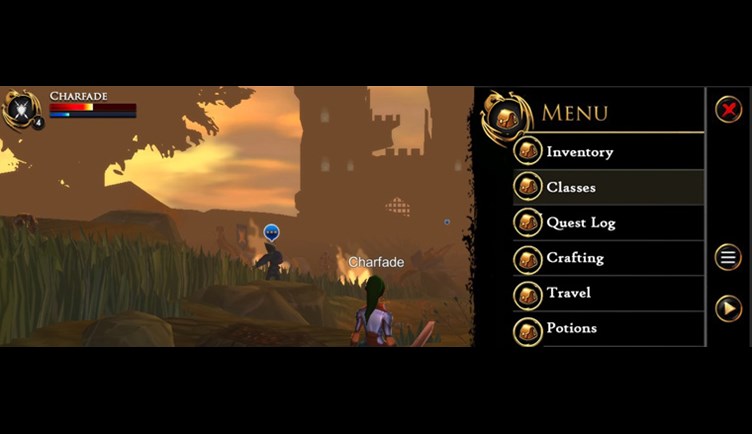 We can start with the Right Hand Menu!
I LOVE the right hand menu. Not just the new slightly aged up looking UI art, but how simple and useful it is. The placement is perfect because it is right above your quick icons for backpack and options. I would like to add an option to make it slightly transparent so you can see a little more of what is happening in the game while doing stuff in it though. Charfade changed the dragon in the corner to be a ring which can house the icon of the menu you are currently on. If you are inspecting yourself, or another character it will show your Class icon there.

Name Plates
Surprise! Guardians... you are going to be pretty happy. The name plate in the image above, is yours! And if you backed us in the Kickstarter, the name plate gets even better with a special Kickstarter tag (just like the Mods and Devs will get special tags on their nameplates.) Also, in the upcoming 1.4 patch, the Health and Mana bars are animated when you get hit or heal... so the glowy part on the health bars will look really nice. 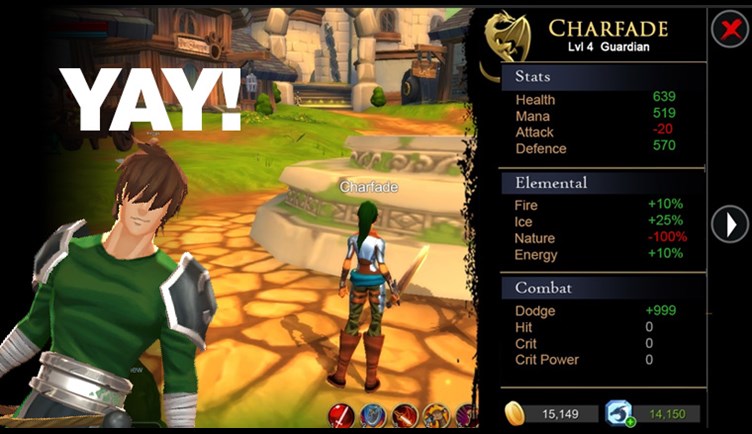 Checking out other Players

Currently in game when you click on another player and look their "Char Page" it pops up a thing in the center of the screen. I want to rename the action to "Inspect" and give you more information and options. By doing this on the right menu, we can make it scroll-able, showing more information like Title, Classes, Achievements, Guild, and give you options like View equipped items, Social Emote, Friend, Whisper, Report. The image above is an early rough draft, but you can see where it is going. A lot cleaner and easier to skim through.

NPC & Monster Names
"You get a name, she gets a name, it gets a name, everyone gets a name!"
We added names above all of the monsters and NPCs. We are also adding an option so you can turn it off if you are making movies or want more... immersion. Originally we were really concerned about performance because all of that text makes a lot of draw calls. But in a pretty cool, and somewhat daring move, we added all the names to the foreground UI layer. This completely solved the problem. I noticed that a lot of the major AAA games do this trick too... you can tell, because the text is always in the front, even when the monster is behind a rock. I am likely going to request that we add health bars on any monsters that you are actively fighting too.

We ran into some critical bugs during our testing which have now been fixed. We are testing today and if everything looks good we should be ready for app submission tomorrow. (NOTE: We only have to do an app submission when we update the game itself. We can release maps, content, and weapons/armor at any time.)

Next up, the story of the DragonSlayers at Ashfall continues... you will encounter Talyn, the DragonLord villain.

We will be machine gun releasing new features, fixes, our next round of Combat improvements starting with the current classes (before we release more), Ashfall Part 3, the UI changes, and tons of other stuff. Follow my design notes here to always be in the loop.

We intend to have completed every major game feature and delivered all remaining Kickstarter rewards (including all custom weapons, NPCs, and Maps) and more. Exciting! The shops in Battleon will open, and even though we will still be working on more features, the primary focus will be on expanding the world content: quests, stories, dungeons, cutscenes, weapons, armors, classes, pets, etc. I, for one, have always been, and am still excited for things like Darkovia, Carnax, Oaklore & the Pactoganal Knights, the Shadowscythe, amongst the new things we will be introducing to the game world.

The official release date for AdventureQuest 3D has been announced for the 15th year anniversary of our studio, and the original AdventureQuest. I am thinking... a live event. A big one.