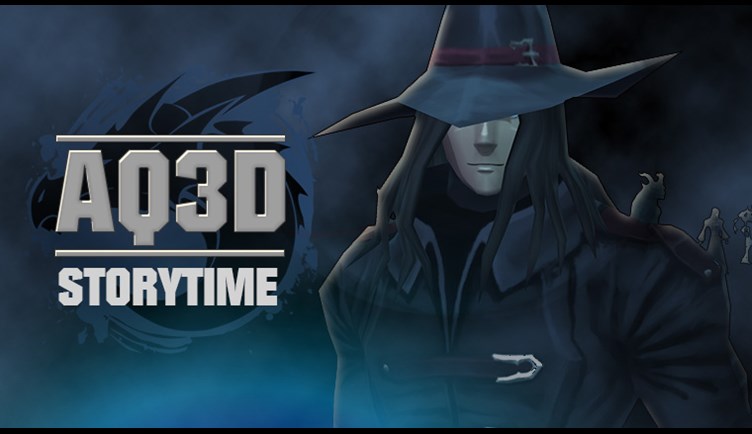 It has been a.... well, it has been a week. While we prepare for AdventureQuest 1.4 to release, how about we do a little story-time catch up?

As I write this, Zhoom and the team are rolling our most important and complicated release yet. AdventureQuest 1.4 will bring parties, cosmetic equips, improved combat, monsters get spells and special attacks, you will walk faster backwards, and more.

I think we should start a drama series called AdventureQuest Z and get the narrator from DragonBall to narrate it. I have been SICK. The sickest I have been in a long time. It started right after I was helping judge a Krav Maga Black Belt testing last Sunday. Lost 10lbs and missed almost all of last week. (If you were wondering where the all juicy and delicious design notes were hiding.) I made it back just in time for the April Fool's Gag....

THE VR HELMET WAS REAL!?

So I was barely out of bed and J6 messages me a photo and says, "I want to do this!" It was a picture of a weird retro VR Helmet he crafted. Yes, J6 ACTUALLY made that helmet from the April Fools post in real life --  with working lights and all. That was his wife, Cinazul, wearing it for the photos. If you have been around a looooong time, you may remember her from the Save Chuckles video on Youtube.

We have done April Fools gags every year since we started the 1st AdventureQuest. From replacing the entire game with stick figures to save bandwidth, to making every player a mod, to swapping all the NPCs from our games, and weirder-- like that whoopee cushion one where every character in the game made random um, poofies. I think liked the format & style of this latest new one the best. Instead of messing around with the core game mechanics disrupting a normal release... we made a really funny gag product, which became more and more obvious as you read on, and as a  "SPECIAL PROMOTIONAL OFFER" it included in-game items that were actually in the games for everyone to get. Which was neat because that linked players in the game back to the gag page meaning more people saw it and knew it was a joke. A really fun and funny Win/Win.

Even if you are not a wrestling fan you should read this story.

Stryche and Rolith had gotten me tickets to go with them to Wrestlemania 33. I knew it was probably going to be the Undertaker's last show... which is the only reason on Earth I choose to get out of bed and chug that bottle of Pepto and go with them. It was also important for Rolith, who if you have been following Alina's tweets-- you know he is going in for surgery today. Considering how much pain he was in, I really should not have been complaining about how bad I was feeling. Anyways.... there we were, at Wrestlemania 33.

Here is the secret formula for professional wrestling:

It is actually some amazing storytelling. Every character has a deep and emotionally driven plot-- most of which happens in the form of videos outside the ring. All year long the storylines twist and turn culminating into Game of Thrones season finale style climaxes at Wrestlemania.

Growing up, I used to watch Wrestling on Saturday mornings. Back in those days it was called the WWF and superstars like Hulk Hogan, Andre the Giant, Rowdy Roddy Piper ruled the ring. But the one character what always fascinated me, as it would undead slayer-- THE UNDERTAKER. He was this nearly 7 foot tall  dead man who defeated his opponents with supernatural power. With moves like "The Tombstone Piledriver" you know it was top notch. As I got older, the Undertaker was pretty much the only reason I would even consider watching wrestling. There was one event where it was Undertaker vs Undertaker! (there were two of them from two wrestling federations and they were... solving the problem.) While they matured his character, getting rid of any hints of dark powers, but keeping the most deathly and powerful entrances of any wrestler-- he was the last standing combatant from an era that I loved best.

So last night was the Undertaker's final match. After taking an incredible amount of punishment he laid defeated and dead in the center of the ring. After the victor left, there was a long and eerie wait... and the Undertaker did his signature raise from the grave. They showed some footage from the match on the big monitors as smoke filled the ring. As it cleared, there the Undertaker was, in his full hat and long coat. Slowly he took off his gloves and dropped them to the mat. Then he took off his coat and folded it, placing it on the ground, then he took off his hat with his signature style and rested it. The audience was in tears. As he walked up the long ramp it filled with smoke and he literally descended into some elevator trap door they had configured just for him. (It looked like he had been swalloed into the underworld.) As 75,000+ attendees walked out of the stadium, his things stayed there in the center of the ring.

A few hours later on the ride home Rolith said, "You want to see something sad?" and handed me his phone. It was a shot of Wrestlemania where they were almost done breaking down and packing up everything. The ring was still there... the Undertaker's stuff, still sitting undisturbed in the center of the ring."

Ending on some Good News

Just got word that Rolith's surgery was a smashing success. He should be back in a week or so.