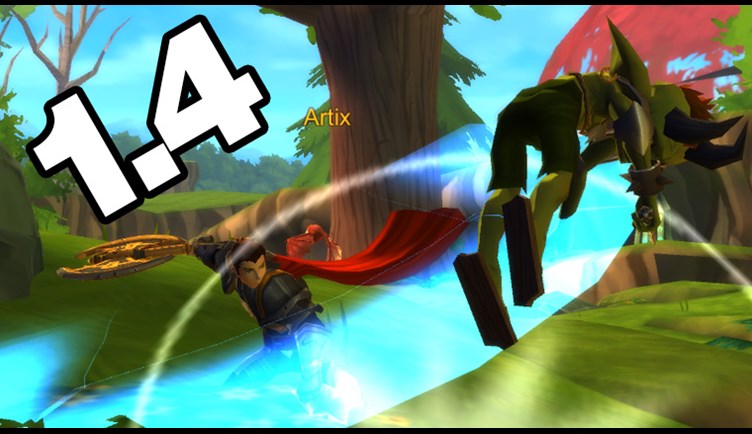 Everything you wanted to know about 1.4 but were afraid to ask!

This week we will be submitting our newest update for AdventureQuest 3D.

Here is what to expect

A Tale of 2 Server Towers

Bon Jovi's "Wanted.... Dev or on Live"
Up until now we have been building AdventureQuest 3D in just two environments called LIVE and DEV. You play on LIVE. We do all of our work and building on a separate DEV client, server, and database. This was we do not mess up the live game while we are making massive changes. Then, when things are ready to go live we do a massive update where everything is copied over in one giant WOOOOSH and the game is live!

Submit-ception
Here is when things start getting tricky. Because But cosmetic equips and the party system required massive structural changes to the database and game client at the same time... the current LIVE version of the game is no longer backwards compatible. Which sounds fine at first, until you remember there is a submission process and you suddenly realize a HUGE PROBLEM... O_O... "The current version of the game is playing on live, but the new submitted version is incompatible with live, so when the submission reviewer goes to play the new version of the game it will not work!"

So we added a new, 3rd test environment. It sounds simple enough, until you remember that this is a cross-platform game. Which makes it a bit of a 4th dimensional puzzle. See, we have 3 test environments, supporting 4 different game clients (Apple, Android, PC, Mac), each one likely running different versions with a little bit of cross over. Just look into Zhoom's eyes... you can tell that all of our brains are about to go explody! (It will probably be fine)

We are blocked from adding the items to the game O_O. Until 1.4 & Ashfall Part 2 is live, we cannot add any items to the live server.

Quickly! We need someone named Will. One of my favorite things to do is to solve problems like this. So what would you do if you were unable to add new items to the game? Me? I went digging for unused and old items in the database with Yergen. We found some unreleased items from Beta and salvaged their Item IDs to make Legion Shirt items. Sorta like high tech dumpster diving. Now, we know that we are unable to add the actual art to these items... BUT, we can turn them into box's, eggs, magical promissory notes, with a description that reads something like, "This item will magically turn into the Legion Cloak when Ashfall Part II is released."

Now, our dumpster diving only turned up 3 usable item IDs. So my next thought was... how about items that only one person is using! YEAH! And then I looked in my hand.... at the Blinding Light of Destiny. Currently a one of a kind. I cried on the inside a little, and gave it up so we could use it as the 4th ID#. So, yup... one of those Legion capes has the soul essence of my axe. I am not going to tell you which one. But, with sacrifices made... but problem solved! ACHIEVEMENT UNLOCKED.

My fearless undead slaying pomeranian, Daimyo, had an urgent trip to the vet this weekend. A lot of you were asking on Twitter for an update. The vet said "His heart is too big." To which I replied, "Of course it is, he loves cuddles and slaying the undead sooo much!" To which the vet replied, "No, I mean it is literally too big." So we are taking the best steps to mitigate the issue and make the little fella comfy. He turns 16 this Summer. Hopefully we have pets working by then.

Dage and Thyton are working on armor sets. Llussion is finishing the final of 4 maps. We have two new monsters coming with this release... one of you saw on the design notes last week. We have a script and our adventure is coming along nicely on the dev server. Korin is animating the cutscenes... this is the part that could potentially take the longest. He has three in total to do. The last one is the most important... but, *spoilers*