Bank to the Future 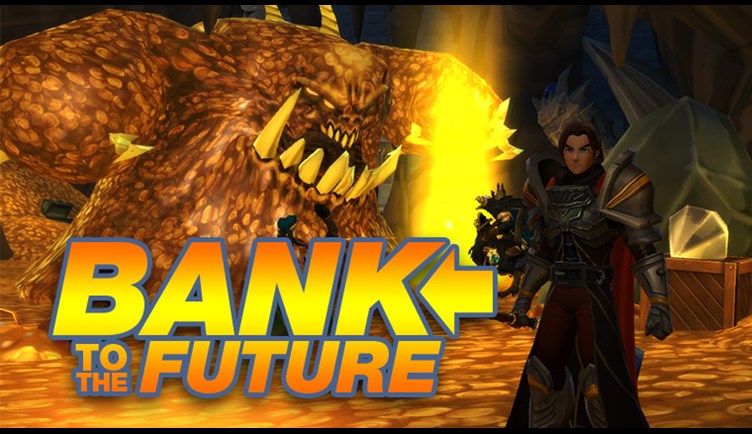 "What do you call a hero that pays to have a vampire bite them? ...Fools Ghoul'd!"

So, have you ever wondered what it actually looked like inside one of your bank vaults? You are about to find out. The bank is opening next in AdventureQuest! If you have been following our previous design notes... then you already know, this release is (literally) for the birds. The bank of Battleon is run by Ornithons-- a race of avian beings. You know what they say, "birds of a feather, do stocks together."

Why are we releasing the bank now? An excellent question, thank you for asking :D Last week we were informed by the coding team that we needed to freeze / lock down the game for a week so they could implement some big complicated, fancy pants engine-level thing they are working on. Apparently it requires them to update every map in the game and will go all kaaboom-pop-explody if we try to release something while they are doing it. We wanted to release Greenguard or Ashfall Part 3 before they started, but these areas not fully cooked yet -- still waiting on some essential animation, assets, and in the case of Greenguard... a main game-wide story character which Thyton is working on (This character carries a fantasy weapon I have never seen in a game before.) ... and balancing. Yergen has been working on the interiors of the shops in the Town of Battleon. The Bank was mostly done-- it is a small but really fun adventure. Exactly the size of something we could finish before the temporary code-freeze. So that, is why the bank is releasing first. While the code freeze is taking place we will finish Greenguard Forest and release it with or after the next patch.

The reason I titled this post "Bank to the Future" was not just for my love of the time traveling movie that ultimately inspired and brought us Rick and Morty >_> but because the original plot I wrote for the Bank starred a Chronomancer. Could not let these "dank puns" to go to waste. Alas, the awesome plot thing I wanted to do was brutally slain by not being able talk to yourself in a cutscene...yet  :-( So we are going to save that for another adventure in... the future... Morty! The future!