It's Friday the 13th! You can get your Camp War team shirts on Heromart.

Past Shirts Are Back Too??

Player Support gets many requests around the time of the camp war shirt sales to extend the availability of the shirts or hold shirts for purchase later. We decided that because it's Frostval and Friday the 13th, we would give you all the gift of camp wars past. However, these shirt logos are redesigned version from the originals. So, new-ish shirts but same camp teams, same in-game items... with one exception. 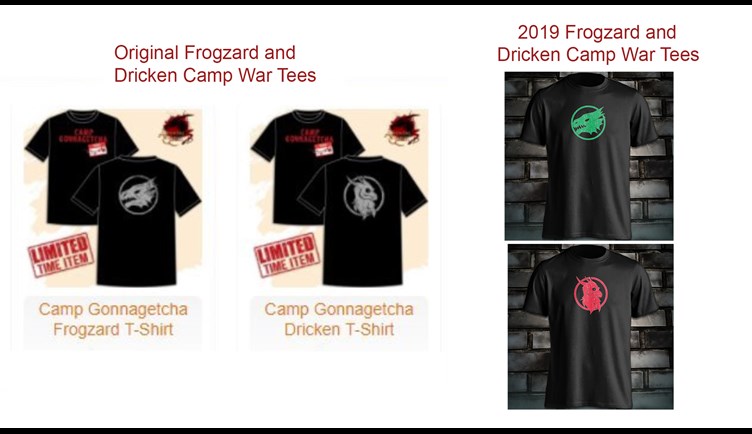 The Frogzard and Dricken Camp shirts have gotten a complete makeover. They no longer say Camp Gonnagetcha and the logos are in color! 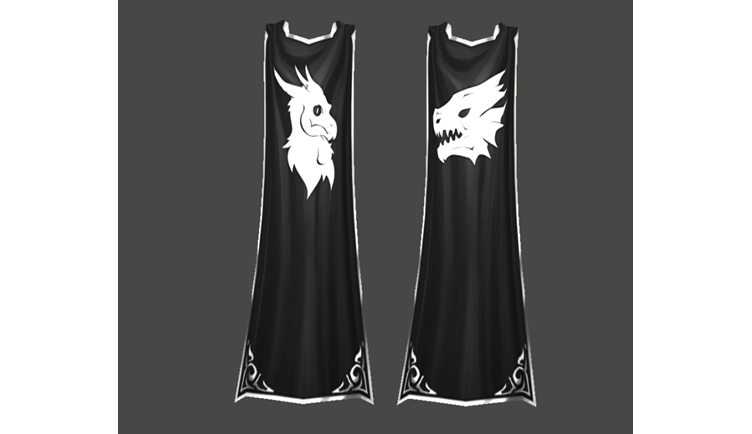 Also, if you bought one of the original Dricken or Frogzard camp shirts you too will get the new cape to go with it.

Backflags are not a Heromart item. They do not come with purchase of a Camp War shirt from Heromart. Backflags are awarded from AQ3D to the winning team. Those remain perma rare in-game items.

In the past, we've said some shirts would be perma-rare. We see how that's caused confusion when we released these new editions of old items (even though the art/designs are different). Going forward, we'll avoid using the term "perma-rare" on Heromart items to help prevent the confusion.

Camp War shirts are actually "limited time" purchases. That means they are made available for a limited time, but they can return again. It means the same as Seasonal... but in marketing speak, not video game speak.

For example... The Welcome to Camp Gonnagetcha shirt returns to Heromart with every camp war. 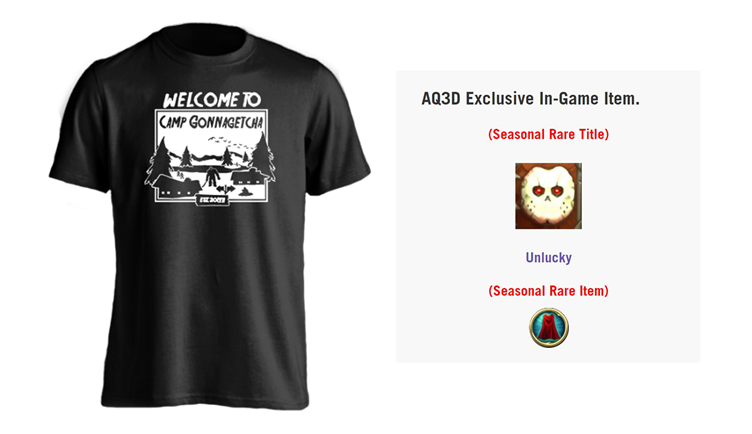 Heromart vs AQ3D (or any other AE game)

Even though Heromart items come with codes for in-game items, Heromart does not represent the games. Heromart sells physical items. These are limited to the number of these items that we have in stock. When Heromart sells out, that does not mean that it is rare. Or when the event they are created for is over, the product does not go rare. This also applies to the in-game items attached them. So... when Heromart restocks or redesigns an item and puts it up for sale, then the in-game item may also return with it. The time between restocks or redesigns varies in length due to the cost to produce it in high quantities.

AQ3D (and other AE games) often release items for an event that Heromart may also have products for. These are not the related to Heromart and don't have the same limitations as Heromart. So, when in-game items go rare... those won't come back. If something in-game is seasonal, it is clearly defined in the shop as a seasonal item (such as Dage's Birthday, Talk Like a Pirate Day, Friday the 13th...)

Sometimes when we announce new products or ideas, the response doesn't always go the way we expect. We wanted to give a second chance to the many players who missed out, or would miss out, in the spirit of the season. We understand that the feeling of exclusivity is important to players, which is why we made the changes to the shirts that we did.