We did some AdventureQuest 3D things! Sorry for the late post, I was out with Strep Throat this time (...am I going for some sort of being sick world record this year?) This release makes it easier to play with friends, lighting stuff, PC & Mac graphical features, Epic Founder Portrait, and more.

Ever have that problem where you are trying to join your friend and the area they are in is full? Or you are with your party and everyone runs into the next area and suddenly you are all split up? --which, is exactly what you are NOT SUPPOSED TO DO in any horror movie! Then good news. We fixed it! (We think.)

Teleport on right top of your friends!

The goto/summon/teleport to friends feature will now teleport you right on top of your friend. Try it out! It is so much better this way... and yes, it is now potentially possible to troll your friends by summoning them to their death for hilarious results.

Particles now visible from all players on PC & Mac

We enabled "impact fx" particles from your fellow players if you set your graphics high enough on PC & Mac. While it would cause my phone to explode, your beastly "PC Master Race" machines can handle it.

Typicality, far away objects hide themselves to improve performance on mobile. If you max out your graphics slider in options on PC & Mac, you will get to see everything.

As promised, Epic Founders and above now have a new nameplate available in the options! Designed by Charfade, it is a genius blend of the Guardian and Kickstarter nameplates.

You can now access all of your unlocked emotes from the emote menu. Right now, it is the little smiley face on your chat window. In the next round of interface improvements (see below) we are going to classy it up a bit. (Technically this feature was in 1.8.7 but it is fully working now)

When the Barbershop was first released, lighting was broken. You could tell this because after getting a haircut, your character suddenly seemed dark-- as if it was another color! We had an issue where the game engine was referencing rogue light probes in the deep, dark, void regions at the end of the map. Some things seemed lit properly... like Kitty Kawaii's braids, which looked blonde. But Kitty's hair was being effected by the bad lights turning it into a dark muddy brown. This is now... FIXED! If you go back to the barbershop (or any map) you will now notice your character is properly and brightly lit... and Kitty Kawaii's hair is consistently gorgeously stylish blonde locks of ever-flowing gold and cuteness. As God intended.

We fixed some stuff...

"Dear Artix, these are internal improvements for staff only-- DO NOT POST THIS ON THE DESIGN NOTES!"

COMING NEXT! I want your thoughts....

So, we have extra customizable action bar buttons coming. You can assign potions & travel forms for now. And I am going to be flogged for letting you know that we have equippable skills and spells working. This includes single use (or stackable) scrolls. It also includes the possibility have having equippable skills like the original AdventureQuest. These extra slots are available on both PC & Mobile. 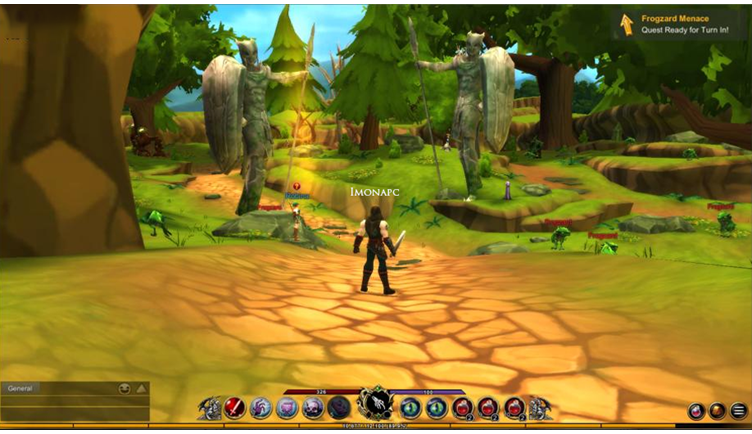 This PC interface design has been brought back to the table! I would like your input. How greatly would this please your eyes top see this when you were playing AQ3D?

Let the team and I know your interface thoughts in the comments below!

P.S. We are rolling out a new pre-intro today to help players who are having trouble controlling the game.