Running a Video Game Studio during a Hurricane 101 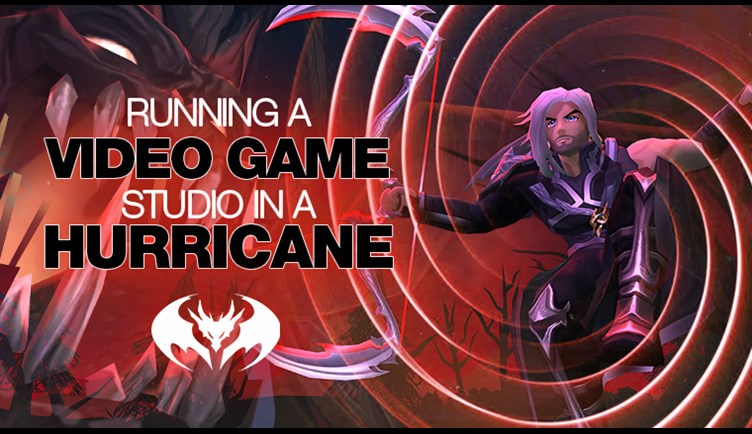 Artix: Gather round the fire and let me tell you a story from a long, long, time ago... when hurricane Irma, the most powerful storm in history, came to destroy Artix Entertainment's Secret Lab.
Players: Um. Wasn’t that just this week?
Artix: *coughs* Yes.
Players: OMG! Is this another Storytime special design notes!?
Artix: You better grab a drink....

Running a Video Game Studio in a Hurricane 101

Hurricane Irma was the most powerful storm in recorded history. We first started hearing about it over Labor Day weekend. Our video game studio, Artix Entertainment, is located in the Tampa Bay area of Florida, which if you look at a map, is pretty high up off the west coast. So we felt pretty safe while watching that Kaiju of a storm sloooooowly treading its way towards us like Tonberry from Final Fantasy. 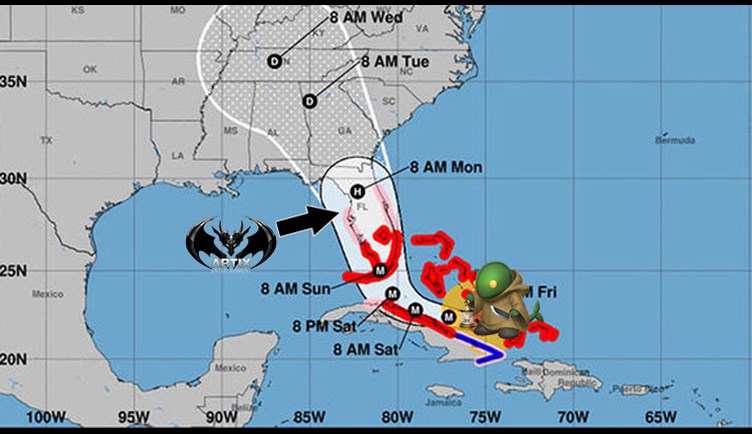 During the week, anxiety built like the bladder meter of an AFK character. Florida declared a state of emergency. Hordes of evacuees fled North like some sort of inverted version of the White Walkers from Game of Thrones. The gas stations ran out of gas. Grocery store shelves were stripped as bare as that time my friend's ex-girlfriend sold all the items off his WoW account.

We thought we were safe, but then the storm continued creeping west, poising itself for a surprise visit to the Tampa Bay area and our "Secret Underground Lab".  The hurricane did not even have the courtesy even email Faith in advance (as is customary for scheduling a visit to our game studio).

We had been furiously working on releases in all our games for our upcoming Friday the 13th event in October, which will be our 15 year anniversary (At least we will not need to worry about blowing out all the candles on the cake ourselves.) Our major games have new releases every week, and if you’re reading this, you probably already know we didn’t miss any. So the following is the story of how we did it while prioritizing the safety of our team.

As CEO/Paladin, my first action was to call Fox 13 News and cancel the interview they had scheduled with us-- because we sent the entire team to work from home for the rest of the week. Second, we contacted all our in-house team members to verify that each had a hurricane plan for the coming storm. Anyone who asked for time off to take their families north were of course granted, while the rest of us figured out who was living or not living in a flood zone, so we could band together when the storm hit. This set the stage for what could have been the greatest Gaming LAN party of all time… but not by far. Keep reading!

On the last day before the hurricane, only a small skeleton crew went into the office where we coordinated the final releases of our game projects, and handed over the keys to our staff in Canada (changing our slogan temporarily to “Battle on, eh?”) We also unplugged everything to secure the lab (OMG, do we have a lot of plugs!) The scariest thing to take down was our homemade farm of cloud servers for AdventureQuest 3D, because once they went offline it would be near impossible to do any game updates or fixes. OK, that’s the boring techie stuff. Let’s move on to the actual hurricane.

The Day of the Hurricane was scheduled to reach us EVERYONE in Tampa was tense and freaked out! It didn’t matter who you talked to or where you went, you knew exactly what it felt like to be on an episode of the Walking Dead. The eerie, empty roads. The uncertainty of where and when the hurricane would land. Up to this point, the news had completely failed to call where it would land, through no fault of their own. The hurricane had some crazy RNG.

At my home, jokingly called “Castle Krieger” -- both because it looks like a castle and has a moat, and more because Zazul checked in on Facebook calling it that name and everyone’s been doing it since -- was to provide shelter for three families.

Stryche, who runs Heromart, showed up with a power drill and some plywood he managed to secure (and we’re not going to ask how). We started boarding up the castle walls, emptying the moat, and throwing all of the pool furniture into the pool. We did the inside windows and accidentally made a giant westworld logo (“doesn’t look like anything to me")

Not far away, Alina who runs AdventureQuest Worlds, went to fill up sandbags for her neighbor and found all of the locations were out. Driving home, she saw some teenagers at an abandoned construction site filling up garbage bags with sand. Alina, realizing this was a pretty good idea (even if not entirely legal) went to join them and help. Then a police car showed up! Everyone looked up trepidatiously, expecting handcuffs, when the police officer reached into his car, pulled out a giant load of sandbags, and with a nod, drove off. Normally we make fun of the government, but man did bring their A-game. In fact, everywhere you looked, you saw everyone helping each other the best they could. It was really heartwarming... until you remembered the impending doom. 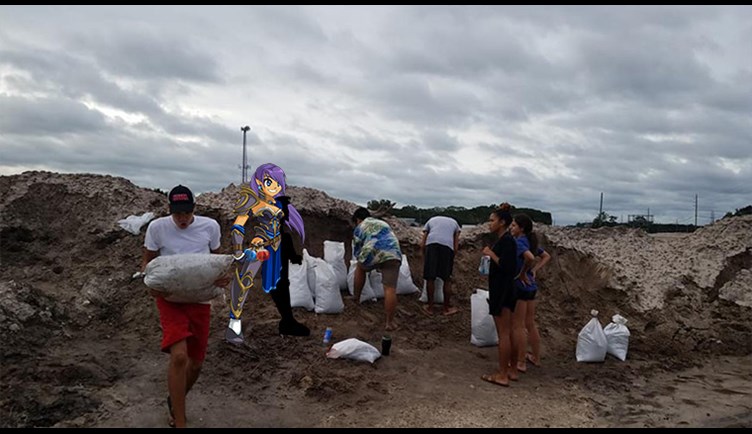 Back at Castle Krieger, the sun had set. Massive gusts of wind and downpour started. The power violently flickered on and off for an hour. Of the four children staying with us, my son, who just turned 3, looked up at me and said, “What happened?” I took a small flashlight out of my pocket and said “whenever the power goes out, you say flashlight and I’ll hand this to you.” When the power comes back on, you say “all done” hand it back to me.” He bravely did exactly that.  And then, at 11 PM, the power died for good (and evil). At which point, my son looked at me, determining if he should be nervous or not, and I smiled and said “do you remember all those times we ran around the house with flashlights… this is what we’ve been training for.”

We were well stocked for the storm, and my home has a generator BUT it never came on. Stryche and I went out to inspect the fuze box and tried everything we could do to fix it. I don’t remember which one of us asked, “We’re going to go out in this storm and try to fix the generator, aren’t we?” No one said anything, we just smiled. As Stryche was standing there in his raincoat and flashlight, I said, “you know, this is how every horror film starts, right?” After an hour we realized we had not put sufficient points into our Generator Repair skill tree and decided we were resigned to experience the storm by candlelight and radio, kind of like that kid in Neverending Story up in the attic. “Atreyyyyyyuuuuueeee!”

Even though the power was out, the cell towers continued to function perfectly, meaning we were in contact with all the staff, our family, and friends and -- I cannot stress this enough -- able to check on them. There was GREAT rejoicing when it was announced the hurricane had dropped down to a category 1 or less. It felt like our team had won the Superbowl (again?) The eye of the storm drifted east towards Lakeland, where AdventureQuest 3D artist Thyton lives. He and his sword and spartan shield defended his home (and probably did a better job weakening his home than the 50,000 people who joined the Facebook group to shoot at it. /facepalm. Hopefully most of them joined just to watch what happened).

Now, this is not our first hurricane, and if you’ve been through one too, the most dangerous part is not the storm itself, but what happens AFTER. There’s flooding, the sewer backs up, the roads are cut off because the trees and power lines (like when one too many creepers walked into your house in Minecraft). Then there’s the alligators. I’m not joking. They get confused and just walk everywhere.

I can’t even express the joy of opening the door and looking out at the sunlight in the morning.  It was like that moment in the Matrix 3 where they jumped up over the clouds, except nobody got impaled afterwards.

I was able to get the generator back online, in addition to powering a fridge full of milk for my 1 year old daughter, I could sit at the counter on my laptop typing out the unfinished AdventureQuest 3D design notes and newsletters. AdventureQuest 3D artist Dage, built a fire to brew up some coffee and spent the day guarding the animals at his house (a zoo that includes a bearded iguana dragon and enough dogs to make a sled team). The smart thing to do immediately after a hurricane is… NOTHING. Not unless of course, you’re an official working on clearing the roads, restoring power, or in a real emergency.

While I always write in a tongue and cheek way, this was a terrible situation. We were lucky, but there are a lot of people who lost their homes, possessions, and lives. Our hearts go out to everyone who suffered loss from this Hurricane. And we celebrate the heroes who did whatever it took to keep people safe. One interesting story is my friend Hannah who saved a friend using Twitter.

4 million people across the state do not have power and Warlic, Dage, Faith, and I are a few of them. The Lab has power though. We got our video game studio back online and running. As I write this, the coders are working on the new class improvements for AdventureQuest 3D.

I was really impressed by how the team came together and helped each other and their neighbors to help each other through the storm while simultaneously getting their releases out on time. AdventureQuest Worlds had the climactic finale to their Shadow Dragon of Envy boss battle. DragonFable players returned to Swordhaven to save the Queen. The original AdventureQuest heroes began the new and improved quest for The Cure in Darkovia. Right now, HeroMart is shipping out all the latest orders and our player support team is going through the overwhelming number of messages from the last few days to help out everybody in need.

Thank you to all of you who sent us concerned messages on Twitter and Facebook-- even though the storm weakened by the time it hit us, the threat was very real and your kind words gave us a real life buff of strength. We are truly grateful for you and our amazing online community of gamers.

Join me tomorrow for some talk on the upcoming... Talk Like a Pirate Day.