May the 4th Be With You

It is time for another MEGA UPDATE on our AdventureQuest 3D development progress. I am pleased to inform you that things are going UNBELIEVABLY GREAT!

The newest early access release for STEAM & Web just went live which adds a lot of core functionality to support what we have coming next. But you will be be excited to see that Capes and potions are now in game

Every hero needs a CAPE

“OMG! Did you guys add cloth physics to the game?” LOL, that is what everyone is accusing us of-- but those incredible cape movements were actually painstakingly animated by Korin. Watching the cape with the new and final run animation is majestically hypnotic.

Here is a sneak peak at the concept art of Zakaru. This Drakel Necromancer will be found in the Dragon Graveyard.  The basis of this story is the legend of the Elephant Graveyard where, according to the myth, older dying Elephants would instinctively direct themselves to this place when they reach old age. The ivory and other valuable resources attracted treasure hunters. Applying this legend to great and powerful Dragons sets the stage for an interesting tale of riches, powerful artifacts and forbidden magical lore. This story was crafted during the visit of our 2nd “World Designer” backer who visited the lab last week. “I had been in Nirvana!” said Zakaru after his visit, “When I met with every single person at AE, it was like a family I never knew before!A Q3D has so much potential to be the best game from AE yet!”

“Howl ya doing?” Coming soon! One of our most highly anticipated features is the ability to shapeshift into a Shadow Wolf and run… very fast. Transformations in AdventureQuest 3D work exactly like mounts in other games. We have our 1st draft of this feature in dev-only testing. It is pretty amazing running as a pack through the maps. Right now it is moving at 120% movement speed, but will possibly go higher. Travel form will play a big part in this game because it is our 1st 3D game and we want to make it fun and explorable. If you missed the Kickstarter Shadow Wolf Transformation, do not worry-- there will be other transformations available for you to acquire in the future. But the Shadow Wolf is officially a ultra rare which will never be available again. A cool way to show that you believed in us before AQ3D was even a game.

“Paladins shot with arrows get Holey Armor.” The next class we will be releasing is Paladin! An argent defender of good, slayer of undead, and vanquisher of evil stuffs. Which raises an interesting question… what is the difference between a Guardian and Paladin exactly? Great question! I am glad you asked :D A Paladin is a warrior of the light. In fact, all Paladin abilities from healing, protecting, and smiting evil are derived from the light. The forces of Darkness are the Paladin’s sworn enemy. Whilst the wise amongst us know that darkness does not mean evil-- Paladins sure are good at fighting it! Paladins are champions of the light. Guardians on the other hand, wield Dragon Magic. This is why a Guardian can unleash a dragon’s breath weapon from the palm of their hand. Sure, there is some overlap… if you saw the magic of Light Dragons you would swear it was a Paladin. But with what you have just read, you are one of the few who will keenly tell the difference between the complex and ancient lore of Guardians from the pure and focused light of a Paladin.

“Never get a second chance at a first impression.” We really want new players to hit the ground running in AdventureQuest 3D so we are designing a killer NEW PLAYER EXPERIENCE that quickly teaches you the basics of how to play the game by dropping you right into a battle between the Guardians and an Undead Army. You can expect the sounds of battle to fill the air as the undead fire catapults and ballistas at the fort that you are trying to save. All around you, you will see Guardians and skeletons actually battling each other in the fields as you slash your way to the keep where you join other players in a free-for-all and boss battle that ends with you journeying to the town of Battleon!

“Hail and well met, fellow Guardian!”. These are the words spoken by the Guardian, Nimrod in the AdventureQuest classic and he will greet Guardians with this same phrase in the AQ3D Guardian Tower. This tower will have special quests and shops for AQ3D Guardians, as well as lots of interesting characters to meet, each with their own story and personality. Guardians from AdventureQuest Classic will recognize Nimrod, Logan and Wuneye (and his sons) but there are several brand new characters written for this AQ3D version of the tower, plus two portals that will take you to Guardian Only challenges and dungeons!

Coming next and Thank you!

AdventureQuest 3D’s game engine is shockingly close to having all of those promised features in place. Zhoom has really done an amazing job leading the coding team. Once this round is “feature complete” we will be ready to open up the Android and iPhone versions for early access. The rest of us have been focusing on the upcoming content including dungeons, new areas, classes, and items. One of the most important incoming features is the dialog and cutscene system which is essential for storytelling in the game. Keep your eyes on our official website for news about this and the other things as we continue building and iterating on it.

Thank you for making this game possible. Your enthusiasm, encouragement and excitement gives us a real-life Guardian Dragon Magic Buff!

Battle on!
Artix & the AQ3D Team 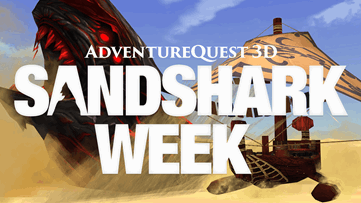 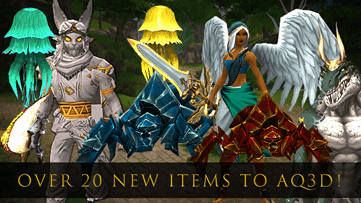 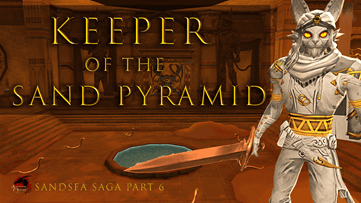