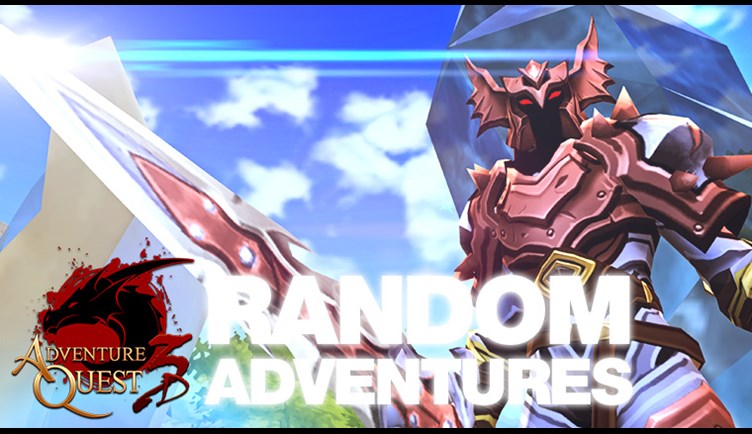 At long last! In the next AdventureQuest 3D release, the blue teleporter crystal in the center of town is getting the feature it was designed for... RANDOM ADVENTURES! In our upcoming release, it will take you to one of two dungeons. The variety of random places it will take you will grow as the game does.

To feed the endless hunger for knowledge of your inner loremaster, here is a brief history of our beloved "Battle Button". In the original AdventureQuest, the battle button was at the top right of the screen and pressing it hurled you into a single fight to the death. If you only had a few minutes to play, it was the quick button you hit for instant action. Then, when we made DragonFable-- we could not have single monster fights. So we introduced a Battle Button that launched a quick, random adventure. These adventures were typically a few short, satisfyingly sweet monster filled rooms along with a boss monster. In our previous games, these buttons normally clutter the main interface of-- but in our new 3D world, we do not want to clutter the screen any more than we have to. So imagine that blue teleporter crystal as an immersive 3D version of the original AdventureQuest's Battle Button. (Fills my heart with joy)

Every time you complete a random adventure, you will get a Dungeon Shard (It is a working name... Boss Bling and Randomonium were veto'dpons). You can use Dungeon Shards to craft stuff at Cysero's forge. For a limited time, during this Open Beta, you will be able to use them to craft Beta Berzerker armor and weapons.

The Teleporter Crystal is... OMG why are Yergen and Oishii storming into my room O_O

Me: *looks up*
Yergen: Oishii has a point... and a question.
Oishii: Will calling it dungeon shards confuse people that the shards come from any dungeon.
Artix: Well, technically... our adventures do not need to be dungeons. They can be outside too.
Yergen: True.
Yergen: Which makes it even more confusing.
Yergen: So... you get a dungeon shard from a random adventure.
Artix: Adventure Shard?
Yergen: That is better.
Oishii: AdventureCoins! LOL!
Artix & Yergen: >_>
Oishii: And these are only going to be accessable from the crystal in Battleon, right?
Yergen: Yah.
Oishii: I like Adventure-something because you know where it is coming from.
Yergen: Battle bucks...
Yergen: Crystal Coins...
Artix: Um...
Yergen: Crystal Credits
Artix: We could have a Crystal Credit card... 16.5% APR financiing on credit
Oishii: If you do not pay it off monsters hunt you to collect it.
Artix: OK... um, I think AdventureShards might make more sense.
Artix: So. AdventureShards?
Oishii: AS... how much AS does this require?
Artix: Anything other than a shard we can use?
Yergen: Tokens... Medals...
Oishii: Logs. Adventure Logs!
Artix: Well Medals makes the most...
Oishii: Adventure Trophy
Artix: OK, I like Trophies.
Oishii: We can always rename it later.
Yergen: ....
Yergen: Adventium
Artix: That sounds cool and special, not generic.
Oishii: I think it's cool.
Oishii: Venture would be cool too.
Artix: Is that a thing? *googles*
Artix: Ven·ture ˈven(t)SHər/ - a risky or daring journey or undertaking.
Artix: Or the verb: dare to do something or go somewhere that may be dangerous or unpleasant.
Yergen & Oishii: Ok.
Yergen: So, how many Venture should the Berzerker armor pieces cost?
Artix: I need to finish this design notes post
Yergen: Have you been typing everything we've been saying?
Artix: >_>
Artix: Venture Trophy
Yergen: I like it when it is just one word.
Yergen: Lootz!
Artix: I am not opposed to lootz... it is funny. not magical. But fun.
Oishii: Treasure?
Artix: Who awards these prizes upon completing a run?
Oishii & Yergen: They're boss drops.
Artix: I mean.. the monsters do not actually have them on them... metaphorically, you get them for completing the dungeon from the crystal right?
Yergen: Yes, the Crystal is the... the... danger room.
Oishii: Is there a story for why it is giving out these quests?
Yergen: It is probably training and preparing the heroes.
Yergen: It gives you a grade.
Yergen: Stickers!
Yergen: 20 stickers for Beta Berzerker!
Artix: >_>
Artix: Back to the crystal...
Yergen: Or Gem!
Artix: AdventureGems?
Yergen: Battle Gem!
Oishii: That is cool!
Artix: ...you know we made an entire game called Battle Gems.
Oishii: Synergy!
Artix: ...
*Cysero walks in*
Yergen: Want to talk about stickers?
Cysero: I have finished going through all of the app store reviews commenting to players.
Cysero: Our biggest request is translation into other languages.
Cysero: Next biggest is a port of AQWorlds...
Artix: On it.
Cysero: 5 stars and we can make AQWorlds...
Cysero: Artix, I need to talk to you about tech demo stuff for... er.. we will talk about it when you're free.
Artix: We need to lock down the name of our Random Adventure reward... O_O
Everyone: ....
Cysero: What happened to dungeon shards!?!?!?
*Yergen recaps for some length of time and ends with the word* ... stickers.
Oishii: I like hats.
Cysero: Turn in 50 hats and we will forge you... a hat.
Cysero: Adventure Ore
Oishii: Advent-Ore!
Artix: That sounds religious.. or possibly a giant robot.
Cysero: Bobble!
Cysero: Salty tears!
Cysero: I like artifacts.
Yergen: Shardifact!
*from the other room* Alina: OH MY G!!!!!
Cysero: A SHardifact.. not a Shartifact!
*Cysero says a lot of things I cannot type*
Cysero: A potted house plant.
Yergen: Ficus! This costs 10 ficuses... Ficii....
Cysero: Puddin'
*moment of silence*
Artix: Victorium
Cysero: Vict....torium? Why not just Winnium.
Yergen: Bring me 15 wins!
Cysero: Favor! You gotta favor! Bring me 15 favors. For your party. Party Favors.
Oishii: Loot bags.
Yergen: I am still fine with Loot.
Artix: ... not sure if I am getting tried, but I sorta like Win.
Cysero & Oishii & Cysero: Fine.. just pick one.
Cysero: But some monsters drop more than one Win...
Cysero: Except that don't . Because we can't do that yet.
Yergen: We can give a partial Win, lol.
Cysero: We could drop a big Win!
Artix: /facepalm
Artix: Maybe we should just go with Battle Gems.
Yergen: Battle Gems!
*Oishii does not reply... she just walks out of the room to go type it into the Database*
Cysero: This is sort like if we dropped AdventureQuests... or MechQuests....
Cysero: When someone goes looking for how to find BattleGems in AdventureQuest 3D... will they find the other game instead?
*Lunch bell rings*
Cysero: I'm going to go eat!
Yergen: Me too!
*They both leave the room*
*I (Artix) am now sitting in my room... alone...*
Artix: So... Battle Gems?

Every time you complete a random adventure, you will get a BattleGem. You can use BattleGems to craft stuff at Cysero's forge. For a limited time, during this Open Beta, you will be able to use them to craft Beta Berzerker armor and weapons.

*Warlic walks in the room*
Warlic: Is it "Battle Gems" or "BattleGems"?