Gift'thulu is a rare species of Gift Mimics known as a... Gimic XD.  You can summon them using a Gifting Rune! One summoned, all players can battle and burst it open for frosty themed treasure and it's valuable crafting item known as... "gift tags."

Giftting runes are available on Available on Blizzy, the little frost moglin by the portal town. Be careful, though, those teeth are not just for show. Gift'thulu is one gift that keeps giving... players a beating! XD 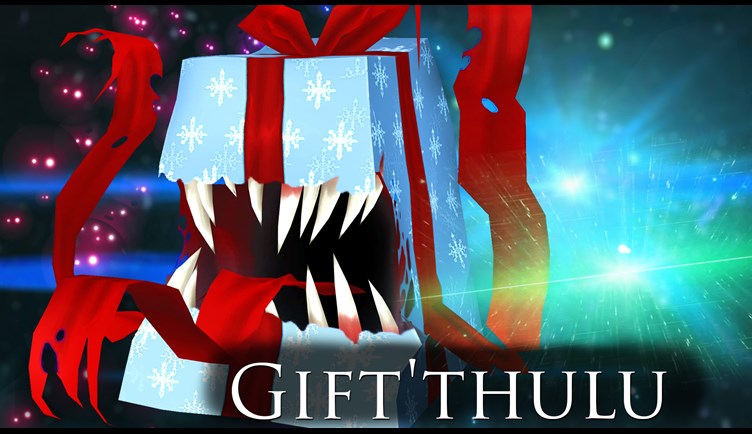 A few weeks ago, the team was discussing what we could do for Frostval that would be "different". A giant gift monster? Fun. But what if players could spawn the giant gift monster!? We loved the idea, but when trying to figure out how to do it... we were met by the usual dev nightmares. How will it work? Can we limit it to specific places? What about lag? We agreed to test the concept... just to see what would happen. Thus we added a dev-only monster spawn feature to an item called the Bush Faction Gold Card. It allowed players to spawn a monster called the Giving Shrub. We were impressed by you and the communities generosity in sharing the bush spawns. Also, proud that the servers were able to handle it. Originally we were thinking that spawning monsters like the bush or Gift'thulu should be limited to only Yulgar's Inn. But after seeing you guys do it in the 75+ player maps we said... oh yeah, let them spawn it anywhere! And thus Gift'thulu is born... (or spawned?) The artists filled it with a slew of festive gear. If you desire a specific items, you can obtain it using the gift tags. 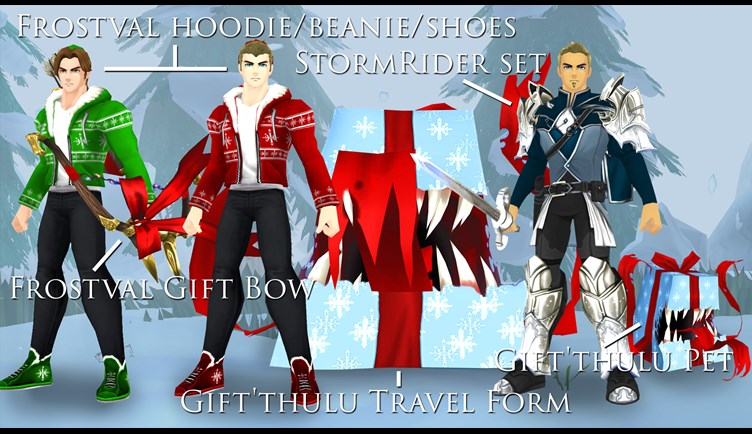 Inside of a slain Gift'thulu are Gift Tags. These tokens can be turned in to Blizzy to buy comfy Frostval hoodies, beanies, and shoes, a Sleigh Bells belt, a Frostval Gift Bow, the StormRider armor set, and a Gift'thulu travel form and pet. There is a very rare chance that a slain Gift'thulu will bestow one of these many gifts to a lucky adventurer. 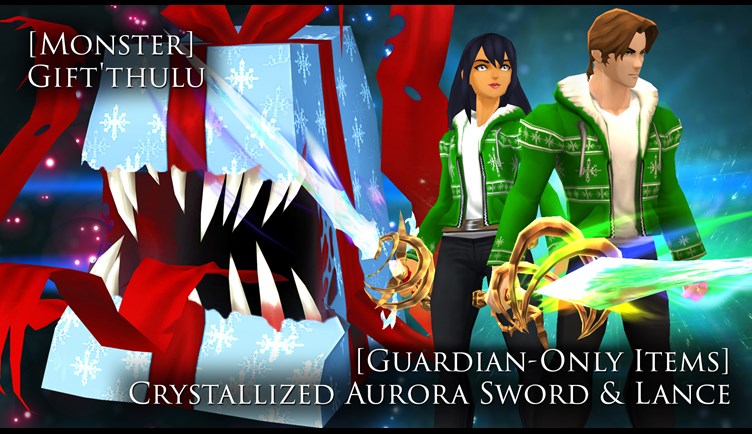 There is a very special Guardian Gift'thulu which has a chance to drop the Crystallized Aurora Lance or Sword instead of the StormRider set. Guardians are also the only ones who can turn in Gift Tags for these items on Blizzy's "Great Gift'thulu Shop". Guardians will find a free small stack of Guardian Gifting Runes in their Token inventory and can purchase more from Blizzy.

Happy Frostval and Battle-Gift On!