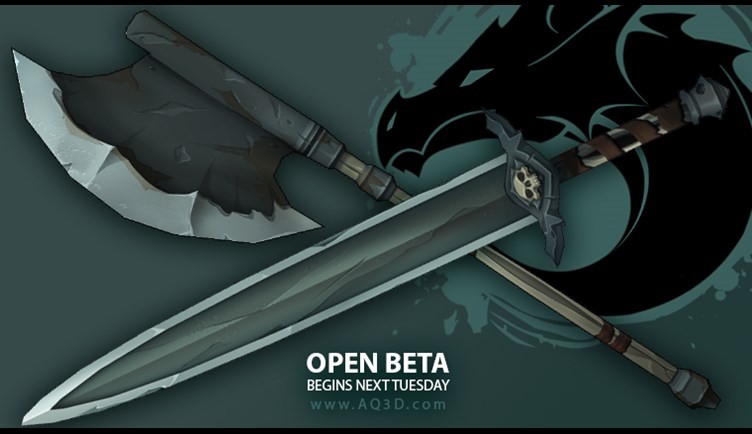 Only 5 days until OPEN BETA begins!

Plenty of time to add new stuff that might break the game before then :D So here are some of the awesomely risky things we are up to.

Dage and Thyton are painting new weapons that we can put in the starting areas. This includes an axe, a bone mace, a few swords and some staffs to boot!

We hacked in a temporary panel to let you re-customize your hair, hair color, & skin until the Barber Shop is done. So when Open Beta begins you will be able to walk up to the door of the Barbershop and change your character for 500 gold. Eyes are coming next. 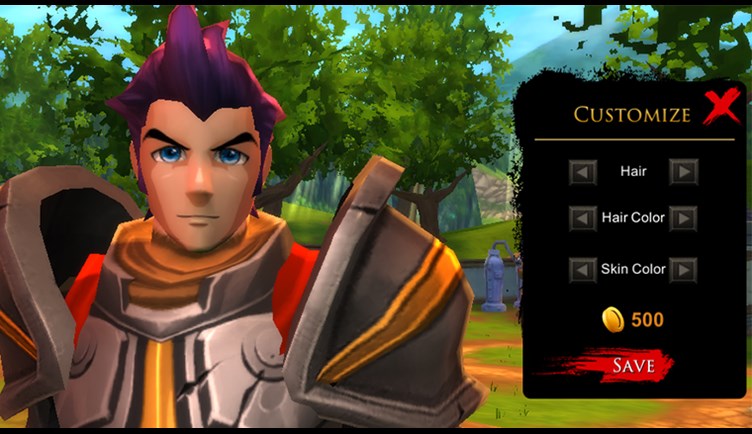 Actually, this just went live... TODAY! If you absolutely hate your name (and if so, why did you choose it?) you can now change your name in the account management area of the AQ3D website for a ridiculously high fee. There is a cool-down period after a name change. 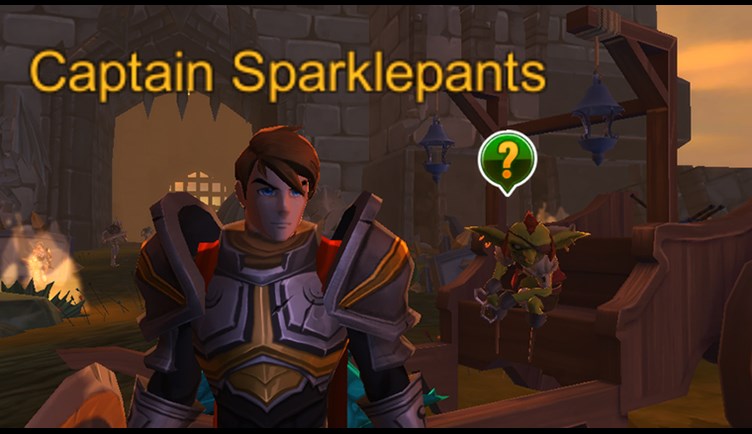 In a previous post I talked about how vital it was for us to add more expression to our characters... especially in the cut-scenes. Xero & Yergen pulled off an extremely ambitious task-- creating facial expressions for not only both our male and female characters, but also for our humanoid NPCs. Initially we thought expressions were going to have to be limited just to the cutscenes, but they managed to get it working on every character in the game with little impact to game performance. Way to go guys! 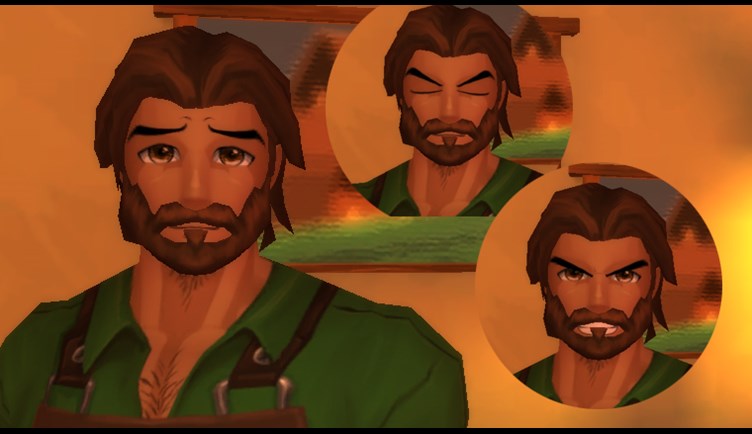 At the start of OPEN BETA next Tuesday you will be able to see this in the update Intro / Tutorial areas. There are still tons of little bugs with it.. like you can see the soul patch on Yulgar's Beard is covering his clenched mouth. Lots of tiny detail stuff like that to work on... it will take a while, but this functionality will  spread quickly to the other areas of the game in our upcoming releases.

Kraken says by tomorrow we will have our new dialog system working! We can now change camera angles when you have conversation with a group of NPCs. There is a ton of tweaking that needs to be made... but this is going to bring so much life to the game. It feels good -- reading a lot more like a comic/manga. 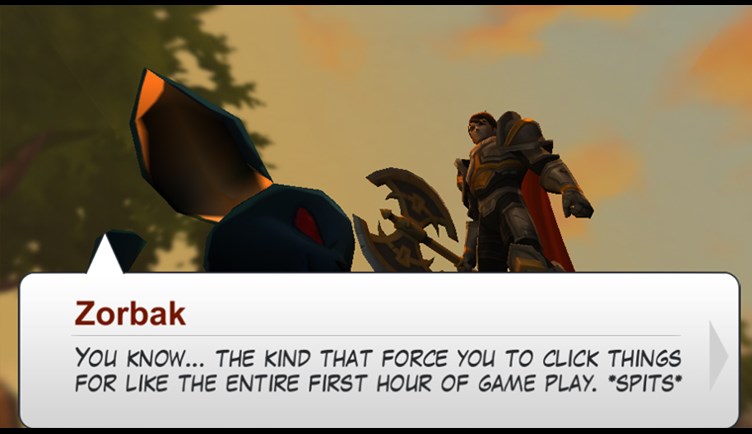 So, two to four characters of the same height work perfectly. But we ran into a challenge with short characters like Zorbak. So Kraken & Korin figured out how to add more camera angles (like the extreme one above). We can also manually tweak the characters on each frame of the dialog. This lets us make them play specific animations, or turn their weapons on or off. "I am ready for my close up Director Cysero!" Kraken also added a tool to let us move the speech bubble arrow so it matches more exactly where the character is.

In Open Beta you will be able to sit in the chairs at Yulgar's Inn! It does not fully work yet.. but it will sure look like it does. O_o. We now have the ability to make anything in the game "sittable." So if you have been looking for an exciting career in determining objects "sit-worthiness" then consider applying to be an official AdventureQuest 3D squatter spotter. They say hind-sight is 20/20. Are you getting flush in the cheeks reading about this? No ifs, ands or butts about it.  Requires doing regular back ups. *stops for a moment* Thank you ladies and gentleman, I will be here all week... *drums go* "bum, bum baaa... bumm..." 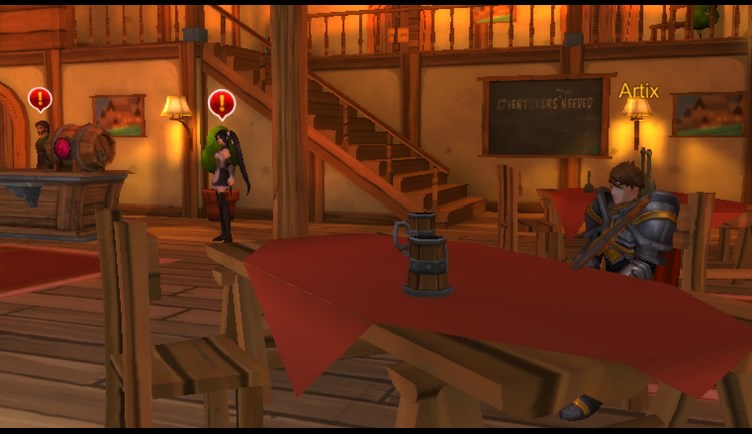 5. Red is the new Orange

There is a ton of other things I would like to talk about but due to the shame of my puns above we should wrap up with... RED TARGETS! We changed the color of the rings under your foes feet to be Red. Then we changed non-aggoring characters to be orange. Of course, when you poke them with your oversized monster-slaying weapon of choice the ring will turn red as they begin to attack you. Friendly targets still have the yellow ring around them, but Cysero really wants us to make it green. Possibly just because his favorite color is green.

Finally, to better be able to identify your primary target in a large crowd, I want to try putting a highlight around your entire target. (We can put a toggle to turn it off in the options if you are making videos or screenshots.) This will solve two targeting related problems: 1. When the target ring falls under the floor. 2. When you are in a huge crowed of monsters and players and have a hard time figuring out which target is selected when hitting tab or the target button.

This is a personal & non game related. My fearless undead slaying battle puppy, Daimyo, was in the puppy hospital for a serious operation. The good news is he is now back, safe and is resting to return to full health. The little guy has been with me for 15 years... he came into my life about the time I wrote the first line of code for the original AdventureQuest. These things always happen at the worst possible time. I am truly grateful to have people like Faith in my life. In a personal crisis like this, Faith took Daimyo and oversaw his procedure, and then insisted that she could keep Daimyo with her to do all of the necessary additional care for him. No wonder he loves her so much. Daimyo is one lucky Pomeranian. In about 5 days he can discontinue the crazy amount of meds and remove the silly looking space alien ring he has around his neck. Then we can get back to slaying some undead!